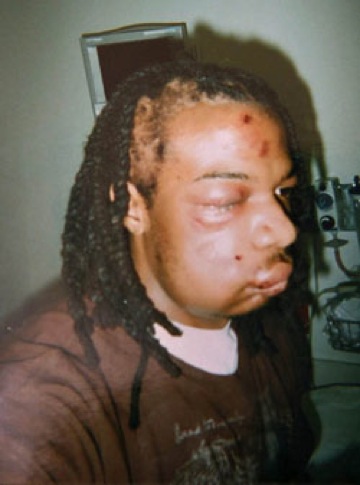 The photos taken by Jordan Milesâ€™ mother show his face covered with raw, red bruises, his cheek and lip swollen, and his right eye swollen shut.

A bald spot mars the long black dreadlocks where the 18-year-old violist says police tore them from his head.

Now, 10 days after plainclothes officers stopped him on a street and arrested him after a struggle that they say revealed a soda bottle under his coat, not the gun they suspected, his right eye is still slightly swollen and bloodshot. His head is shaved. The three white officers who arrested him have been reassigned. And his mother says she is considering a lawsuit.

â€œI feel that my son was racially profiled,â€ Terez Miles said. â€œItâ€™s a rough neighborhood; it was after dark. â€¦ They assumed he was up to no good because heâ€™s black. My son, he knows nothing about the streets at all. Heâ€™s had a very sheltered life, heâ€™s very quiet, and he doesnâ€™t know police officers sit in cars and stalk people like that.â€