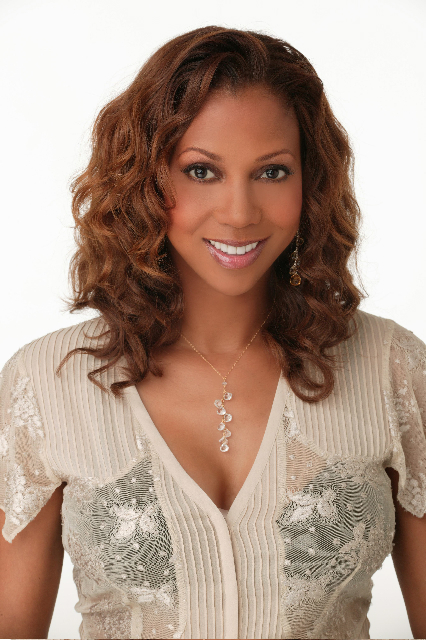 Well it seems like everybody and their MOMMA has something to say about the Kim Kardashian and Kris Humphries wed-lock split-up. Latest person to speak out on the topic is the beautifulÂ Holly-Robinson Peete.

Best known for her roles on 21 Jump Street and Hanging with Mr.Cooper (which used to be the SH*T!, damn I miss that show.) Anyways, she weighed in on the divorce between the two youngins.

She told the Hollywood Reporter that she doesnâ€™t feel bad for Kim Kardashian getting a divorce because she thinks the reality star was in it for the money and she doesnâ€™t think itâ€™s going to ruin Kimâ€™s empire.

“If a sex tape doesnâ€™t ruin your brand, how does a divorce ruin your brand?â€ Peete said. Â â€œThe conversation that, well, America is upset with her, because she has no respect for the covenant of marriage is silly. This is all about money, and fame, and all those things. This is her brand. I think itâ€™s going to be totally fine. Itâ€™s the next chapter. Itâ€™s now whoâ€™s she going to date next.”

Which is kind of true. I actually thought the same thing plenty of times before. How is it that Â Â yourÂ most intimate moments with a person which whom you consentually agreed in doing together isn’t shamed upon but it actuallyÂ HELPS youÂ gain more of a social status in the entertainmentÂ world then tarnishing it.?!Â

Peete, whoâ€™s been married to former NFL star Rodney Peete, says she recently hung out with some pro basketball players and their wives over Halloween and after discussing the topic the consensus is that Kris got used.

â€œThatâ€™s all those guys can talk about. And the gist of it was they just felt so sorry for him, because they know he just got so caught up in stuff, And I just feel bad that no oneâ€™s talking about him, I really do. I feel terrible for that boy. They were saying that when youâ€™re known for marrying someone who has a sex tape out, that was all they can talk about, and how that isnâ€™t sexy right there. I feel terrible for that boy.Â I think he really loves her and heâ€™s young and heâ€™s not used to that type of world. I think he got used, I really do.â€

They all are entitled to their own opinions on the situation, and so are we. I don’t get intoÂ it and I keep my nose out of peoples business. But I will say, that it does sucks for both parties and it’s shameful for the Holy Bible to be going through so much non-sense.