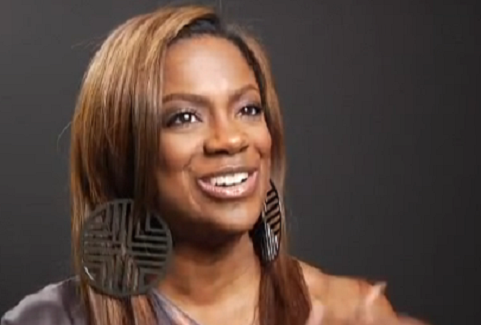 RealÂ HousewivesÂ ofÂ AtlantaÂ star, Kandi Burruss sat down withÂ Hello BeautifulÂ and discussed reality TV and the constant criticism from viewers about the negative images of black women onÂ television. According to Kandi, cast of shows like Real Housewives of Atlanta and Basketball Wives are not on television to represent black women as a whole, they are on television representing themselves:
Here’s what Kandi had to say:

Before I even joined the show everybody was talking about how it brought down the image of black people and black women. But I always tell people when you come on a reality show youâ€™re not trying to represent for a whole race, youâ€™re just doing you. You hope people think youâ€™re interesting and people like it. The one thing people donâ€™t give as far as our series, The Real housewives of Atlanta; we are a majority black cast on a network that doesnâ€™t have that many shows featuring African Americans. So for us to be the number one show on that networkâ€¦..why people donâ€™t give us any props for that, I donâ€™t even understand.

Yes, it does play into the stereotype of what people say black women are with the neck popping, finger rolling or whatever but I donâ€™t feel like itâ€™s any different thanÂ the New Jersey Housewives where itâ€™s mostly Italian Americans on there. What they do on that show? Itâ€™s a lot of hot headed Italians on that show but I donâ€™t see their communities saying â€œ Oh, theyâ€™re not representing us Italian Americans correctly or theyâ€™re not representing white women correctly.â€

I feel like we as black people can be very critical of our own race and I donâ€™t even think it should be a thing of â€œHow are they representing us?â€ Guess what? If you had a camera on you for six months and they taped as much as they wanted to tape and edited it down, Iâ€™m sure theyâ€™re going to have some moments where youâ€™re showing out too.

I agree with Kandi. I also believe that some races have this stereotypical perception of African American women because of what they see in the media and unfortunately when black women are cast for these shows, the producers always attempt to find that person that can feed into that stereotype to make the show interesting. Atleast, Kandi can sleep well at night knowing that she didnâ€™t go on TV acting completely crazy for camera time.

What’s your take on the whole situation, are we as African Americans often stereotyped or are we being too judgmental?