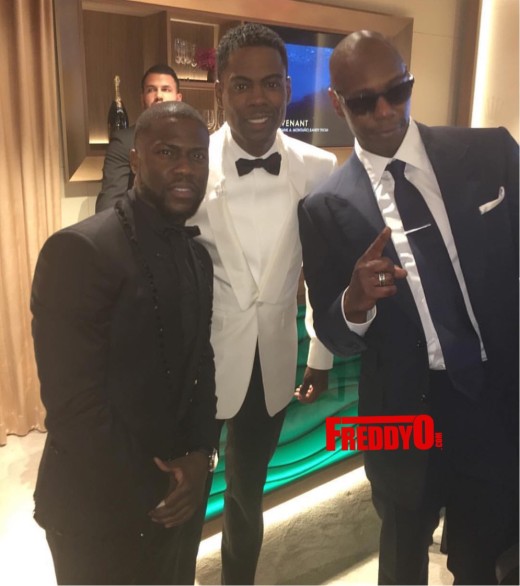 Sometimes the homies help you make hard decisions, word on the street is that Kevin Hart encouraged Chris Rock to stick to his decision about hosting the 2016 Oscars.

People are still buzzing about Chris Rock hosting the 2016 Oscars.

Fellow comedian Kevin Hart had nothing but support for Rock on the red carpet, telling “Extra’s” Mario Lopez,

“I’m looking forward to my brother, Chris Rock. As comedians, the one thing we do is support one another, I think the great ones all do, those that don’t, don’t necessarily fit into that fraternity, but within that fraternity you back one another.”

Kevin revealed that he told Chris not to boycott the Oscars.

“Everyone was telling Chris not to host or to boycott it, I told my brother do it, this is a stage, on the stage we have the ability to get your point across, you address an issue, but you do it in a Chris Rock way, that’s what he’s going to do and at the end of the day he will address the elephant in the room, you’ll laugh then you’ll think about it and years to come you’ll remember what he did . That’s what makes him amazing, that’s why I’m a supporter, that’s why I’m a friend, that’s why I’m proud to be in a fraternity of comedians who support one another, those who don’t get it don’t belong.”

Nothing like SUPPORT! What do you think about Chris Rock’s hosting style last night?

BET Awards went virtual this year, but we must celebrate our culture and thats what they did! Roddy Rich has the number one song...
Read more
Award Shows

Before this year's Grammy Awards even began, unbelievable shock and sadness had overtaken celebrities, athletes, and fans all over the world. Just hours before...
Read more