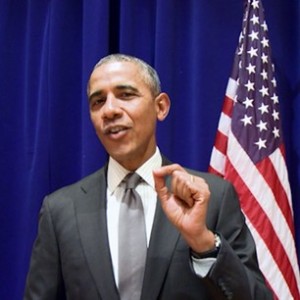 In light of terrorist threats from N. Korea in reaction to Sony Pictures’ “The Interview,” Sony made the hasty decision to pull the movie from theaters, even cancelling the premiere. Now, in his end of the year press conference, President Obama is addressing the issue, and he says that Sony has made a terrible mistake.

“Sony’s a corporation. It suffered significant damage. There were threats against some of its employees,” he said “I am sympathetic to the concerns that they faced. Having said all that, yes, I think they made a mistake.”

The movie’s plot, which has caused quite a stir, centers around two Americans attempting to kill N. Korean dictator Kim Jong Un. Though a comedy, the people of N. Korea didn’t seem to think it was funny, sending this message to Sony only a few minutes ago.

“It’s very wise that you made the decision to cancel The Interview. It will be very useful for you. We still have your private and sensitive data. We ensure your security for your data unless you make additional trouble. Now we want you never let the movie released, distributed or leaked in any form of, for instance, DVD or piracy. And we want everything related to the movie, including its trailers, as well as its full version down from any website hosting them immediately.”

Unwavering, President Obama stands firm in his belief, and says he wishes Sony execs would’ve consulted him before making a final decision.

“I would have told them ‘Do not get into a pattern in which you’re intimidated by these kinds of criminal attacks,'” he said.”That’s not who we are. “That’s not what America’s about.”

Obama isn’t the only one upset about Sony’s decision. Actor George Clooney, in an interview with Deadline.com yesterday, revealed that he had circulated a petition earlier in the week, urging people not to submit to the hackers’ demands, but no one was willing to sign it.

Something tells me this isn’t the end of the Sony saga. It seems that our President doesn’t plan on budging, and apparently, neither do the hackers.