They Celebrated Their Divorce Together?

Have you ever heard of two people who were so in agreeance with their decision to split that they actually threw a celebration for the divorce together? Well, just when you thought celebrities couldn’t get more personal and nonchalant with serious matters, they definitely did. Wiz Khalifa and Amber Rose celebrated their divorce together at a nightclub last night. Who would have thought, right?

They were both mutually happy with how the divorce ended and their individual cuts, money wise, for each were also satisfying. Amber Rose gets a million from the settlement in addition to $14,800 in child support each month for baby Sebastian. I honestly would celebrate too if that was my settlement too, how about you?

Wiz gets to keep the mansion in Pennsylvania along with their 10 cars. Yes, I said 10. Now, why two people need 10 cars is beyond me but that is not my life and apparently they know what they are doing. I’ll just mind my business. **sips tea**

However, it is good to see two wonderful people coming together with no drama and making decisions that literally benefit all three of them but most importantly their son!

Wish the best for that trio, now that everything is set and stone I hope the communication stays this smooth!

Check out the details below. END_OF_DOCUMENT_TOKEN_TO_BE_REPLACED

The celebrities stopped to Make their Mark with CROSS Pens to help raise funds for #FlintKids at the All Def Movie Awards . Later the signed poster will be auctioned to raise funds for the relief efforts in Flint Michigan. I love how everyone is galvanizing their resources and attempting to help the good people of Fling Michigan. The All Def Movie Awards was truly star-studded with celebrities supporting in the wake of the noticeable lack of diversity in the Oscars Award Show. Check out the images below. END_OF_DOCUMENT_TOKEN_TO_BE_REPLACED

This comes as no surprise since he is “Yeezus,” after the latest “twitter beef” that started out all as a misunderstanding. Just last week we saw Kanye West going in on Wiz Khalifa in twitter rants over Wiz releasing some lyrics off of a new song then ending with hashtag #KK. Kanye even went as far as bringing the children in it. We all know you don’t mess with people’s children, definite no no! Well one can see how the misinterpretation started as Kanye’s wife is none other than Kim Kardashian (KK.) In reality.

END_OF_DOCUMENT_TOKEN_TO_BE_REPLACED

Amber Rose might be cashing out on her now infamous Kanye tweet.  According to TMZ , Sextoy.com would love for Amber to help them in making a prostate massage toy.  They are the world’s largest online distributor in the sex toy marker, so Amber would be able to make some serious money if she were to agree.

END_OF_DOCUMENT_TOKEN_TO_BE_REPLACED

Comments (3)
Kanye West, Wiz Khalifa — How to Make Money Off a Twitter War 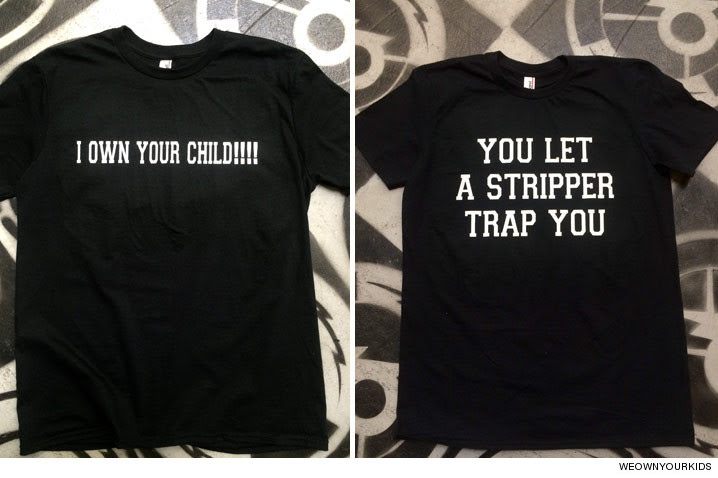 Five dudes are making serious bank off the Kanye West and Wiz Khalifa war by turning the epic Twitter feud into fashion.

We Own Your Kids, a t-shirt company that puts Twitter beef on t-shirts, was just in  its idea phase Wednesday when Kanye unleashed his Twitter commandments on Wiz.

No word if they’re going to put Amber Rose’s tweet on a tee, but if they do it’d be a sure sellout.

Wendy Williams Slams Kim Kardashian, Kanye West After His Wiz Khalifa Feud: We Met ‘Your Wife on Her Back’

Guess it’s not a “real” celebrity feud unless Wendy Williams throws herself and thrashes into the mix, and man … things sure are getting out of control with this Kanye/Kim/Amber/Wiz business.

“The idea [Kanye’s] talking about Amber being a stripper, [he’s] not saying about anything she hasn’t admitted herself. As a matter of fact, Kanye, you’re the one who gave this stripper who come-up. And, by the way, we recall meeting your wife on her back. … I’m embarrassed for Kim Kardashian. I’m not even going to call you West because clearly that is not a real marriage. Any time a man is fighting with another man and bringing up his ex, like why is Kanye still talking about Amber, what kind of respect, or lack there of, does he have about his new son, Saint, and his daughter? I’m embarrassed for Kim but, Kim, I think you’re more into the image of what it looks like to be married to what you think is a man than anything else. I’m embarrassed for you. This is shameful.”

We’re pretty shocked, for sure. For Wendy to go so hard up against Kim and Kanye, that takes some serious guts, because she knows that the blowback from the hardcore Kardashian fans that watch both her show and “KUWTK,” is gonna come, and it’s gonna come hard.

We’re not on Kim and Kanye’s side at all — we’d consider ourselves to be more Team Amber and Wiz for sure — but calling out Kim for her past exploits is no different than Kanye calling out Amber for hers.

Careful, Wendy: we’re not saying certain people just shouldn’t be taken down a few notches, ’cause come on … look at who we’re dealing with here … but what we are saying is be careful how you word things — because hypocrisy is an easy sea in which to tread with regard to these people and their personal lives.

This is what Wendy had to say.

Kanye West Gets Heated “Don’t Ask Me About Wiz Beef”

Kanye West went all Dr. Jekyll and Mr. Hyde when the topic of his war with Wiz Khalifa came up just now at LAX.

Kanye was clearly NOT in the mood to talk about the beef, but you have to see his reaction to our guy asking if he regrets bringing Wiz’s kid into the conversation.

Just watch … it’s extraordinary, because Yeezy briefly flashes back to the guy who was always angry at paparazzi — and then, just as quickly, he bottles that anger.

The way this clip ends is remarkably friendly.