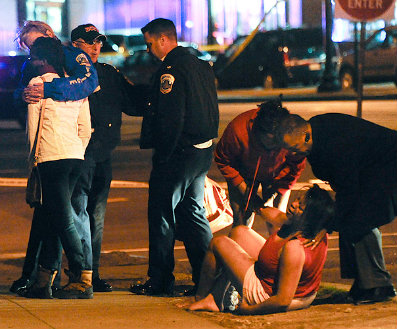 D.C. police say a 14-year-old was driving a minivan involved in a fatal drive-by shooting that involved 9 people. 5 people were injured and 4 people were killed. The boy has been charged with murder and a family court judge said Wednesday he would be held at a juvenile facility because he is a threat to himself, others, and he is a flight risk. This is why we need more mentors and role models. This child is obviously angry about something. A gunman shot rounds from a moving van into a crowd, police said Wednesday. Three suspects have been arrested in the drive-by shooting Tuesday that injured five others, but investigators said the motive wasn’t clear. 6 and 3 women were hit by the gunfire around 7:30 p.m. in a neighborhood known for drugs and related violence about 7 miles from the White House . Police spokeswoman Gwendolyn Crump said Wednesday the 4th victim had died. The weapon was recovered. The Washington Post reported that police pursued a van from the scene, aided by a helicopter. Washington reported 143 homicides last year, the fewest in nearly 50 years.
Become a Mentor and help stop this epidemic!!! -Courtney L.