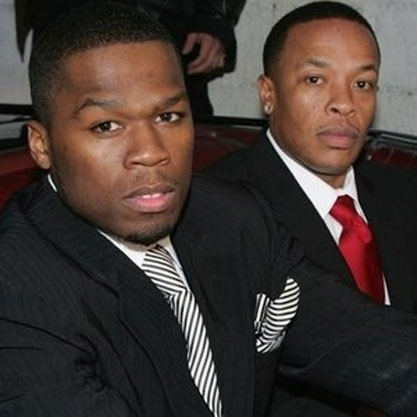 Apparently not all of 50 Cent’s friends are happy about his new line of headphones. The rap star recently revealed that hip-hop super-producer Dr. Dre and record executive Jimmy Iovine are upset with him for joining them in the headphone business. Fifty tweeted, quote,

“Jimmy Iovine and dre mad at me cause I’m doing sleek by 50. I guess I’m not going to be on detox Lol.”

Fif goes on to say that he’s a “little” hurt that they’re mad, adding that he’s recorded a verse dedicated to Dre and Iovine. Fifty Cent writes, quote, “Oh my god this is hard,” adding that fellow rap star Eminem is, quote, “gonna have a heart attack when he hear this.”

Fifty Cent just recently released his Sleek By 50 Cent line of wireless headphones. Dr. Dre and Jimmy Iovine entered the headphone market in 2008 with their popular Beats By Dr. Dre line. Both 50 and Dre are also preparing to release new albums. Dre’s long-awaited “Detox” is said to be arriving later this year, as is 50’s fifth studio effort, “Black Magic.”