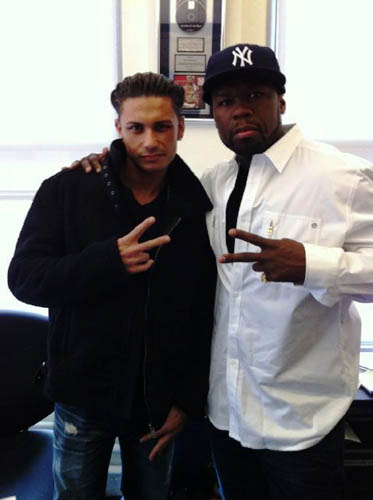 Pauly D signing to G-Unit Records might be a Shore Thing!! It is reported that a 3 album deal with GÂ -Unit isÂ on the table for Pauly D of MTV’s the Jersey Shore.Â  The two met while Pauly was in New York last week for the screening of 50â€™s film Things Fall Apart to discuss the deal. In addition to music,Â 50 is interested in working with PaulyÂ onÂ a merchandise line, specifically aÂ Pauly D-brand headphone. (He is a DJ guess that makes sense)Â The deal is said to be inked before the Jersey Shore cast takes off to film season 4 in Italy.

Most recently, in September 2010, Matthew Wilkening of AOL Radio ranked Pauly D’s rap song off the soundtrack, “(It’s Time to) Beat Dat Beat”, as the #1 Worst Song Ever on the list of the 100 Worst Songs Ever.Â I guess theÂ homieÂ 50 is willing to take that chance.