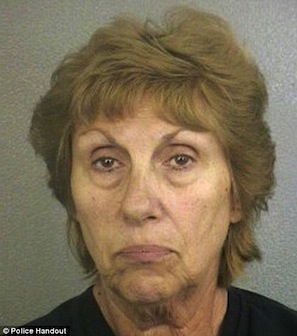 A 66 year old woman from Florida was arrested after she allegedly shot her estranged son-in-law when he came to pick up his 3-year-old son (her grandson).

The grandmother told police that the man and her daughter were â€œin the middle of a horrible divorce.â€

According to the victim , when he asked for the things, she instead pulled out a handgun and starts firing shots,â€ according to Dani Moschella, a spokeswoman for the Broward County Sheriffâ€™s Office.

Miglino was shot twice with a .22 caliber Beretta handgun. The bullets hit him in the shoulder and rib cage. Even though he was injured, he pounced and wrestled the gun away from Hepner, then drove away while calling for help, police said.

But it turns out that Hepner, too, had called police, with a different version of events.

When she was asked by the 911 dispatcher about whether she or Miglino pulled the gun, Hepner replied: â€œNo, he pulled it on me and heâ€™s got it. He drove away,â€ according to an audio recording of the call.Â She also mentions to the dispatcher that he and her daughter were in â€œthe middle of a horrible divorce.â€

â€œMrs. Hepner told authorities that [Miglino] pulled a gun on her so it was in fact the exact opposite of what had happened,â€ Moschella said. â€œAs evidence goes, that was a gem. That absolutely corroborated everything that Mr.Miglino had told detectives.â€