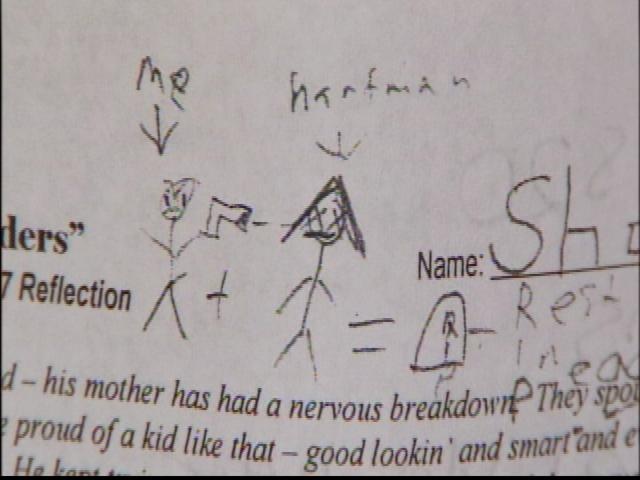 A 14-year-old autistic boy in Georgia faces possible felony charges of making terroristic threats after he drew a stick-figure version of himself firing a gun at his teacher. Are you kidding me? After seeing the drawing that Shane Finn had made on his classwork, officials at Atlanta’s Ridgeview Charter School suspended the eighth-grader and decided to pursue charges against him, Fox News in Atlanta reported.InÂ his drawing, a stick figure identified as “me” is shooting a gun at the head of another stick figure, identified as “hartman,” a reference to one of the boy’s teachers. Finn also added a tombstone to the picture, with the letters “R.I.P.”Â  Karen Finn, the boy’s mother, says the school is overreacting and points out that her son has the mental capacity of a third-grader. “I think that there needs to be some sort of common sense used with these school systems that a 14-year-old autistic boy who does not understand what he’s done or what he’s drawn, who has an IQ of 75, should not be charged with a felony,” Finn told Fox News. “I find it appalling. It’s outrageous.” Finn plans to fight the charges against her son, which, she argues, have failed to take his learning disability into account. “It’s that sweeping, zero-tolerance [attitude],” Finn said, “and I just think that it’s ridiculous.”

As a special education Â teacher, I can say that the judge will laugh in their face. – Courtney L.