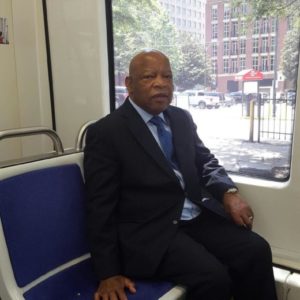 Congressman John Lewis should finally focus on the burning and crime infested inner-cities of the U.S. I can use all the help I can get!

As many as a dozen House members had already said they wouldn’t attend the swearing-in Friday, but others joined them in a show of support for Lewis.

After Lewis said in a Meet the Press interview that he believes Trump’s election is illegitimate and he won’t go to the inauguration, Trump tweeted Saturday morning that the Georgia Democrat should take better care of his “horrible” and “crime-infested” district and was “All talk, talk, talk – no action or results. Sad!”

It was wonderful to join the hardworking librarians at the ALA annual and meet new friends like Stan Lee.

Hours later, lawmakers began saying they would bow out of the inaugural ceremony because of the insults as reported by USA Today.

“I will NOT attend the inauguration,” Rep. Yvette Clarke, D-N.Y., tweeted. “When you insult @repjohnlewis, you insult America.”

Rep. Judy Chu, D-Calif., said that “after much thought,” she also would stand with Lewis and not attend.

“I stand with those who have fought for us and encourage future leaders to act with inclusion and respect,” she tweeted.

Rep. Ted Lieu, D-Calif., said the decision for him was a personal one and “quite simple.”

Lieu, whose office had previously told the online news site Mic he would be doing reserve duty the day of the inauguration, said he doesn’t dispute that Trump won the election, but he doesn’t want to “normalize” Trump’s behavior or the “disparaging and un-American statements he has made.”

*COME SUNDAY…THAT’S DAY* Greetings My Dear IG Friends, I’d like to say THANK YOU for Your LOVE,Your SUPPORT and Your PRAYERS! It’s been a very rough,a very ugly and a very frightening 48 Hrs. for me but I’M STILL HERE! My sincere apologies to any of you who felt dismayed or heartbroken by my personal decisions and I’m extremely grateful to those of you who waited without judging me,who stood by me regardless of the choice that I would have made… Praying that God will use my voice as an instrument of healing and unity during this time of discourse in our nation… Again, I say to all of you with all my heart– THANK YOU! As we celebrate the life and memory of Dr.Martin Luther King,Jr.,We must also take a moment to pay tribute to A Great Man & Civil Rights Icon- CONGRESSMAN JOHN R. LEWIS Most Definitely NOT “All Talk and No Action”! We HONOR and THANK REP. JOHN LEWIS for the “Ultimate Action” that he took by almost losing his life on “BLOODY SUNDAY” at the foot of the Edmund Pettus Bridge in SELMA,AL (1965) so that we and “EVERY AMERICAN” could have a better life! Have A Happy & “PEACE-FILLED” Sunday,My Friends! Love&Blessings Always….. JENNIFER❤????❤

A photo posted by JENNIFER HOLLIDAY (@jenniferhollidaydreamgirl) on Jan 15, 2017 at 6:10am PST

“Trump — who lost the popular vote — has made a series of racist, sexist and bigoted statements,” he said. “In addition, he has attacked Gold Star parents, veterans such as John McCain and now civil rights icon John Lewis.” It’s unclear how many others will join Lieu and Clarke. Many lawmakers slammed Trump for his criticism of Lewis but stopped short of saying they would skip his inauguration because of it.

The lawmakers who had said before the Lewis fracas that they wouldn’t attend include California Democratic Reps. Jared Huffman and Barbara Lee, Rep. Earl Blumenauer, D-Ore., and Rep. Katherine Clark, D-Mass. Mic is keeping a handy running list.