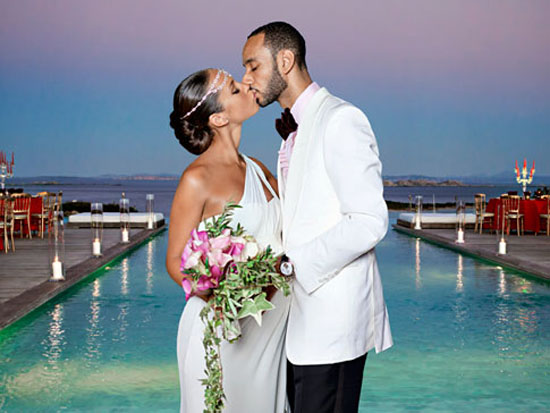 Alicia Keys and hip-hop producer Swizz Beatz have exchanged “I Do’s.” The couple tied the knot Saturday in Corsica while surrounded by close friends and family. U2’s Bono and actress Queen Latifah were also in attendance. Keys, who is expecting the couple’s first child, wore a white gown while Beatz wore a white tuxedo. Keys and her new husband first arrived on the island of Corsica just days before their wedding where she was spotted sporting a baby bump while wearing a bikini. The couple announced they were expecting in May, and the baby is due in November. This will be Keys’ first child.
Swizz Beatz already shares a child with his ex-wife Mashonda Tifrere, who is also an R&B singer. She and Beatz, whose real name is Kasseem Dean, announced their plans to divorce in April of 2008. They had their first and only child — a son named Kasseem Dean Jr. — in 2007. The famed beatmaker also has a son named Prince from a previous relationship.