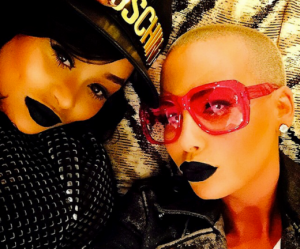 French Montana has developed a reputation for being a “player.” From Khloe to Trina, French has gotten a lot of attention in response to the women he’s dated. Now, he’s making headlines again, with rumors that he’s dating Amber Rose! Click on the link for details!

Nobody wants to bring in the New Year alone, and apparently French Montana is no exception. Instead of spending the holidays solo, he decided to fly in not one, but TWO shapely women to his hotel in Vegas. Those women were none other than Blac Chyna and Amber Rose. The two seem to have become a package deal lately, seen shopping together and even bonding by making bestie twerk videos for “The Gram.” Both women, recently split from their rapper boyfriends, have been hitting the rebounds like nobody’s business!

Rumors that Amber and French were messing around started a while back when the couple was spotted at a New York nightclub. The chatter eventually died down, but now, thanks to this impromptu trip, the rumors have resurfaced. Pictures were posted by Blac Chyna and viral sensation “A Town” from French’s suite, but were later deleted.

Amber and French may be hesitant to make their romance public because they have so many “friends” in common. French and Wiz (Amber’s ex-husband) are good friends, and Kanye, (also Amber’s ex) is producing French’s next album. Kanye is also married to Kim K, who is Khloe’s sister, who also happens to be French’s ex. Whew! Perhaps keeping this thing on the down low is best for everybody. This situation has the potential to get real ugly!

What do you think? Is French wrong for flying her out?