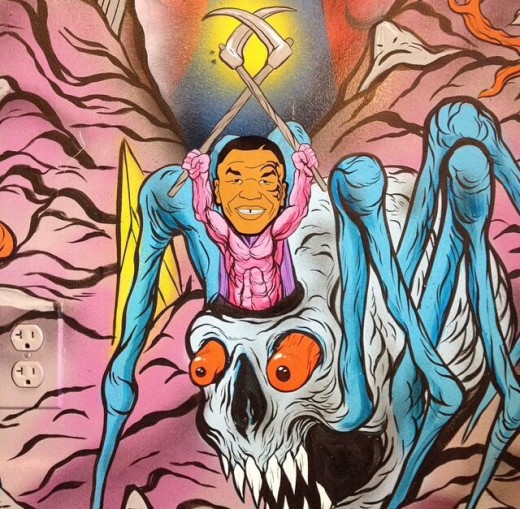 A brand-new animated comedy series aptly named ‘Mike Tyson Mysteries’ aired Monday night on Cartoon Network’s Adult Swim! In the promotional video, the design of the characters and pace of the show seems to be quite reminiscent of the classic ‘Scooby Doo’ series. The trio of characters—Mike, his adopted Korean daughter, Yung Hee; a friendly ghost named Marquess of Queensbury, and an alcoholic pigeon—all ride in a large blue van, the ‘Mystery Mobile’ as they solve mysteries together as sent to them via carrier pigeon.

The first episode involved the characters joining together to aid an author, Cormac McCarthy with writing the ending to his latest novel. However, as soon as Mike gets ready to start writing, a chupacabra attacks, leaving Mike with no choice but to put up his fists to fight! There’s an even a cameo from the tiger from ‘The Hangover!’ The show features the voice talents of Mike Tyson (of course!), comedian Norm MacDonald (the pigeon), and Jim Rash (Marquess of Queensbury).

You can catch new episodes of ‘Mike Tyson Mysteries’ as they solve crimes left and right with Mike’s own brand of justice on Mondays at 10:30 PM Eastern.