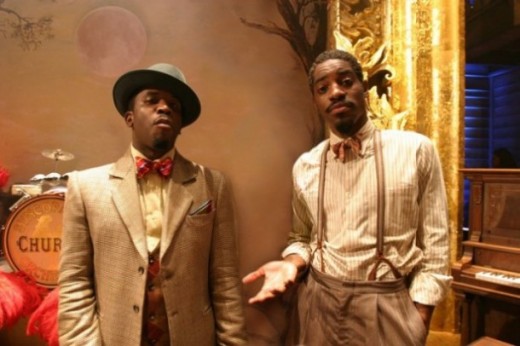 Andre 3000 was out promoting his upcoming movie about Jimmi Hendrix and opened up about who he think should play himself and Big Boi in the Outkast movie.

I would love to see an Outkas Movie! Check out what 3 Stacks had to say in the comments below.
While out promoting his portrayal of Jimi Hendrix in the upcoming movie “Jimi: All Is By My Side,” Andre 3000 is imagining what could be if they were to cast actors for a movie about him and fellow Outkast rapper Big Boi.

At a screening for the Hendrix film at the Grammy Museum in L.A. Sunday, Big Boi said any Outkast movie should be pure comedy with Kevin Hart playing Big Boi and Leonardo DiCaprio playing himself.  “Jimi: All Is By My Side” opens in theaters this weekend.

Andre 3000 also told the panel Sunday that the role was demanding noting that he lost 20 pounds to play the guitar icon, working out twice a week and eating just enough calories to keep himself going.  He also said he learned to play the guitar left handed and studied Hendrix’s walk and talk through interview footage.  Hendrix died in 1970 at the age of 27.

I can’t wait to see Andre as Hendrix and see him live at the #ATLast Concert!