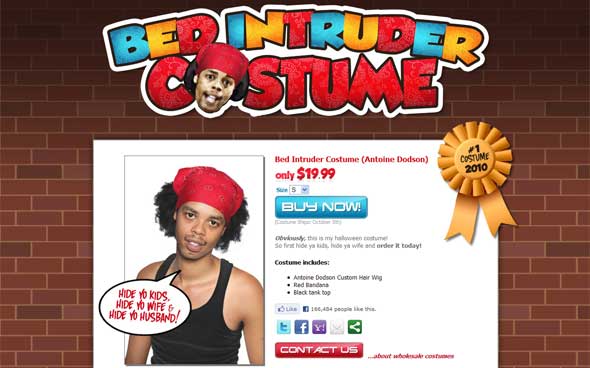 Antoine Dodson’s 15 minutes of fame is going to last at least until Halloween. Dodson, who shot to fame after his gregarious
interview –about an attempted rape of his sister by an intruder– with a local Hunstville, AL news station became an Internet meme, has his own Halloween costume.

Now numerous drunken fools will be barking choice Dodson quotables like, “Hide yo wife, hide yo kids!,” or “Run tell that homeboy!,” in full costume. Besides the novelty of the joke quickly wearing off, race relations will not improve when inevitably drunken white guys in full Dodson regalia are running around pretending to be a flamboyant black man.

Interestingly, this supposed “Bed Intruder Costume” seems to be nothing more than a red bandana, a black tank top and a wig. At $19.95 per costume, someone is making a hefty profit. Dodson receives half the proceeds of the Gregory Brothers’ “Bed Intruder Song”-which led to a new home for the Dodson family outside of the projects. But despite the BedIntruderCostume.com’s claims that it is endorsed by Dodson himself, there isn’t much more evidence that proves that really is the case.

While there is nothing funny about an attempted rape, the cult of Antoine Dodson is proving to be a comedic goldmine.