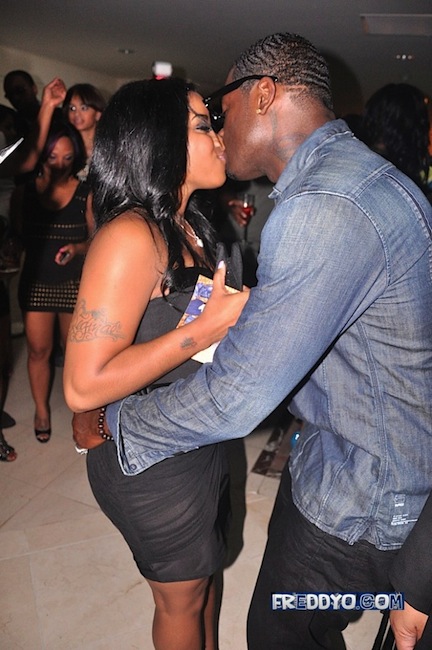 Toya Carter is spending her last days of single of the “Single Ladies” club is frantically getting ready for her wedding. With her wedding just days away, the reality TV star has been running around putting the finishing touches on her ceremony. When we caught up with her, she was in the middle of her big-day beauty routine (waxing, facial, massage, etc.). While she’s whipping herself into wedding-ready shape, what about her gown? “I had to get it taken in a little bit. At first I took in too much,” Toya told S2S. While that might usually spell disaster in most cases, she had nothing to worry about because she hasn’t allowed her seamstress to cut the dress.

Dress shopping for her mother didn’t go quite as smoothly. “Mom is super excited. Dress shopping, she was crying and everything,” Toya said, before adding that things went left when she and her mom couldn’t agree on what type of attire was appropriate for a mother-of-the-bride. “She wanted to pick out the sexy dresses. ‘No, you can’t be looking sexy like that.'” After all the pre-wedding stress, Toya will need to unwind, so the bride-to-be is planning to celebrate her last days of freedom with a bachelorette party on Thursday.

The happy couple has invited 200 people to the wedding, set for June 18 at 6 p.m. in Atlanta. Toya, however, is still waiting on some RSVPsâ€”one in particular from her ex-husband Lil Wayne.

“I don’t know if she’s coming. I invited him

She also invited Weezy’s most recent baby mamas. “I love me some Nivea and Lauren [London],” said Toya, who wouldn’t say whether the ladies would be in attendance for her nuptials this weekend. She’s chosen to decorate with a color palette of eggplant, victorian lilac, Iivory and silver.

Toya has recruited eight bridesmaids for her wedding, including her manager and BFF Tiny “Tameka” Cottle, who are both serving as her matrons of honor. One of her brothers will also be a part of the ceremony. Toya didn’t say whether her daughter Reginae would be participating, but her daughter is “so excited” about welcoming Memphitz to the family.

For his part, Memphitz is keeping one big secret from his wife

“I don’t know where the honeymoon is. He didn’t tell me,” Toya revealed. “He’s big on surprises.”