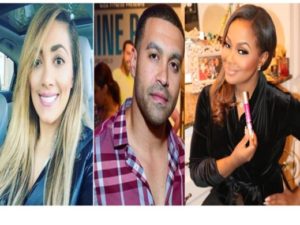 In the shots, which were snapped last month, according to TMZ, the incarcerated reality star, 38, is embracing the wavy-haired beauty Almufti, who’s wearing a black shirt and pants. Nida is wearing a prison uniform consisting of a short-sleeved khaki shirt and slacks. 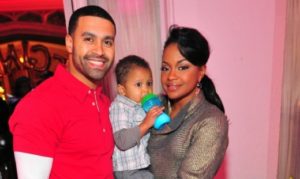 Apollo and his fiancee, who announced their engagement last month, they posed in front of a romantic background the prison provides for photo sessions, according to the outlet.

While Bravo producers tried to keep Almufti’s identity a secret to preserve intrigue as she’s featured on the Real Housewives Of Atlanta’s upcoming ninth season  her name has since become revealed publicly. One of the storylines on the Southern branch of the housewives franchise will show Nida’s exchanges with his bride-to-be over the phone and in the prison.

Almufti is an East Coast native who pays multiple visits weekly to Fort Dix, the prison where Apollo’s serving his eight-year sentence in his fraud conviction.

She’s been wearing a makeshift ring in place of an actual piece of jewelry, according to the site. The romantic shots come amid a rash of recent ongoing courtroom conflicts between Nida and Parks, a 43-year-old attorney, after a judge last month awarded her a divorce from the convicted felon.

Under terms of the split, Parks received full custody of her two sons with Nida, six-year-old Ayden and three-year-old Dylan. Apollo will be able to have visits upon his release from the correctional institution, the judge ordered. Nida had previously attempted to filed for divorce from Parks, but the split had already been processed through the family court system.