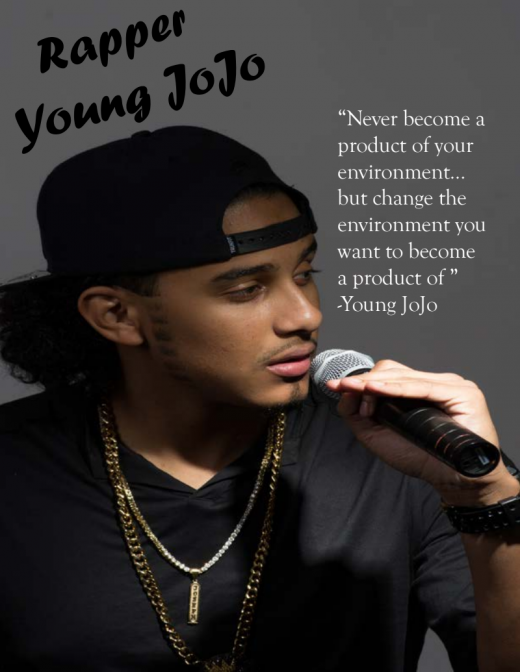 Joseph Marquez, better known as his stage name Young JoJo is a rapper, event host and occasional actor. Born in New Mexico to Joseph and Roslyn Marquez, JoJo was raised as a military child but spent most of his childhood on the Gulf Coast of Mississippi. He started his music career rapping at the early age of 3. When JoJo was 12, he wrote his first rap song which was the inspiration to write all the songs on his first mixtape. At the age of 15, his first mixtape entitled “The Route to Fame” was released in which he wrote all the songs for. From there Young JoJo won several contests from his single “Gametime”.

In 2009, tragedy struck, on the same day JoJo’s idol, Michael Jackson died, Young Jojo was diagnosed with a rare blood disorder called ITP and was not expected to perform again nonetheless live another day. After six months of strong faith, JoJo did the impossible of making a complete recovery. While in the hospital, JoJo wrote numerous songs in which he released in his next mixtape entitled “The Slaughter”. “The Slaughter” took over the gulf coast of Mississippi giving him the name “King of the Coast”. This led to JoJo opening for acts such as Rick Ross, 2Chainz, Bun B, Lil Chuckee, Travis Porter, Rocko, Pleasure P, and many more. JoJo received radio play from the mixtape and was featured on Brooklyn, New York’s own Da Cave Radio as the “Power Artist of the Hour”. Young JoJo was nominated at the Real Talk Awards for Best New Rap Artist.

Young JoJo can also be referred to as a humanitarian in the making. JoJo created a foundation for children called “Young JoJo’s Kids with Krowns Foundation”. Young JoJo partnered up with the K&J Foundation created by Brian Pierce where he performed for kids at the local malls, promoting seatbelt awareness, saying no to drugs and bullying in schools. He can also be found in the movie “A Girl Like Grace” directed by Ty Hodges starring Meagan Good, Raven Simone, Romeo Miller, Drew Sidora, and Garcelle Beauvias. With the help of J. Caspersen, Young JoJo produced a hit single entitled “Outta Control” inspired by the film. Check it out below:

“Outta Control” is now available on iTunes, Amazon, and Spotify. He will also appear in the movie “Don’t Mess with Texas” starring Reese Witherspoon, Sofia Vergara, Richard T. Jones, and many more. Both movies are due to be released in 2015.

This is a great look Young Jojo!

Omeretta the Great,has created a bit of uproar with her "Sorry Not Sorry" record, watch video suggests that if you don't live in Fulton County...
Read more
Artist Spotlight