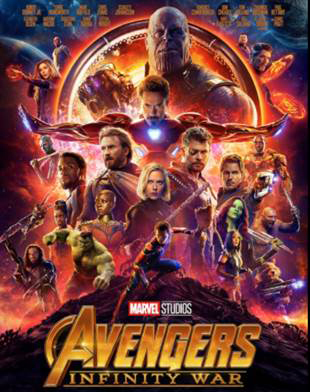 Director duo Joe and Anthony Russo crammed action and adventure into a microcosm of various superhero and villain pairings to recreate the ultimate Marvel Universe with the release of Avengers: Infinity War. The pair incorporated previously released movies’ stage settings—such as Thor: Ragnarok and The Avengers—to return the unwavering fans’ investments in [beloved characters’] heart-wrenching denouements. These endings saw new beginnings as they were seamlessly incorporated into the Avengers: Infinity War storyline to connect the dots and breathe life into new missions. The script synthesis highlights the characters’ brave and exhilarating rendezvous complimented by electrifying graphic effects, creative directing, multi-tiered individual character storylines, and pristine choreographed performances. Film buffs will board a ride that delivers excitement along a journey that other movies never ventured. The film soared to the top of the charts, planting the Disney and Marvel flags into the cinematic soil yet again as it boasts $39 million across the globe ranking as the fourth largest Thursday night preview in history.