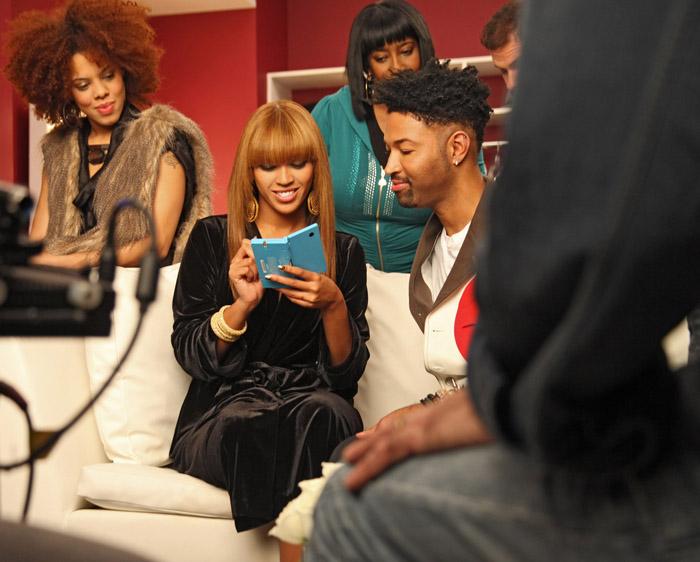 In a new commercial set to premiere on Nickelodeon, BeyoncÃ© will be seen playing Style Savvy, a video game that turns players into managers of a virtual boutique. I got to give it to B she knows how to get them checks…

“Fashion is something I’ve been familiar with my whole life,” she says in an interview before the shoot. So when Nintendo tapped her to represent its product, she was happy to oblige.

Pop diva Beyonce is putting her career on hold as she kicks up her feet and enjoys life. The “Sweet Dreams” singer told “USA Today” that the hiatus is her New Year’s resolution, adding, quote, “It’s definitely time to take a break to recharge my batteries.” The inspiration for Beyonce’s break came during her recent 110-city tour to promote her “I Am … Sasha Fierce” tour. She took time out to see Egypt’s pyramids, the Great Wall of China and to go whale-watching off Australia’s coast. When Beyonce got home, she says she wrote a “contract” with herself. She won’t go back on tour or set foot in the studio until a few simpler goals are achieved. Beyonce said, quote, “I want to go to restaurants, maybe take a class, see some movies and Broadway shows.”
Of course, Beyonce still plans to make time for the Grammys on January 31st, where she’s nominated for ten awards. The singer’s “break” doesn’t quite mean she will disappear. The singer just filmed commercials for her Nintendo game “Style Savvy,” which introduces items from Beyonce’s House Of DerÃ©on fashion line. Those ads are scheduled to air in March on Nickelodeon both before and during the Kids’ Choice Awards. The Beyonce juggernaut continues with the February launch of the singer’s Coty fragrance, Heat. There are also two weeks in February when she has concert dates scheduled in the Caribbean and South America to meet demand of fans there.

In other Beyonce news, the R&B star is clarifying a few facts about her recent New Year’s Eve performance at a party hosted by a member of Libyan leader Moammar Gadhafi’s family. A statement released on the singer’s website reads, quote, “The party in St. Bart’s on New Year’s Eve, with BeyoncÃ© in performance, was hosted by Muatsim-Billah Gadhafi, not his brother Moutassim Bilal ‘Hannibal’ Gadhafi, as reported by the press.” He is Gadhafi’s fourth son and his father’s current security advisor. Rumors circulated online in the first week of the new year that BeyoncÃ© had sung for Moutassim “Hannibal” Gadhafi who reportedly has a history of violence against women.
While the New Year’s Eve whereabouts of “Hannibal” are not mentioned in the singer’s brief online press release, it does mention other big names who attended her show such as Usher, former BET CEO Bob Johnson, and actress Lindsay Lohan. Three music industry veterans — Russell Simmons, Kevin Liles, and L.A. Reid — were also in attendance. Mariah Carey performed at the 2008 New Year’s Eve concert in St. Bart’s. Other past performers include Enrique Iglesias and Timbaland.