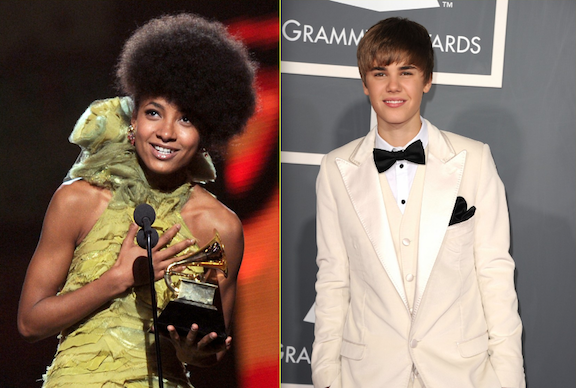 Last night was the 53rd Annual Grammys and everybody who was somebody was in attendance. However, I really can’t say that I paid much attention.The hype around the show was at an all time high.Â The most shocking moment of the night had to have been the winner of the best new artist category…Esperanza Spalding.

“I really didn’t think it was going to be me,” the Jazz singer tells MTV news. This win makes Esperanza Spalding the first jazz artist to ever win Best New Artist at the Grammys. A few of her accomplishments included touring with Prince on his Welcome 2 America Tour and performing in the White House.

According to the AP “From the time Esperanza Spalding appeared on the scene in 2005, the dynamic singer, bassist, composer and arranger has been heralded as jazz’s next big thing,”

I think everybody thought that the award was either going to Bieber or Drake.

I kind of feel bad for her because it seems that everybody did NOT want her to win. She’s had to have worked just as hard as Bieber or Drake to even get the nomination so why shouldn’t she win?

What do yall think? Did Esperanza Spalding deserve the win?