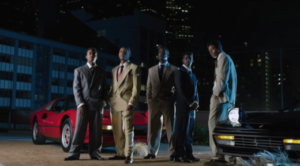 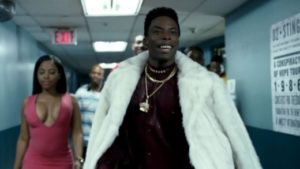 “THE NEW EDITION STORY” also controlled the social media conversation as BET ranked as the #1 most social network on television** all three nights (January 24th-26th). Additionally, the special was the #1 most social episode on both Facebook and Twitter all three nights – outranking all other TV programs including cable, syndication and sports. Celebrities, press and viewers hit social media in droves to echo their love for the band and the miniseries, with 3.8 million people generating over 4.74 million interactions across Facebook and Twitter over the 3-day period. On Twitter, BET and “THE NEW EDITION STORY” drove the top 20 trending topics each night, with topics including #Betamax, #BobbyBrown, #CandyGirl, #MikeBivins, and #LukeJames. Over the weekend, “THE NEW EDITION STORY” continued to trend as BET aired a marathon of the special. Parts Two, One and Three ranked as numbers 2, 3 and 4, respectively, in the Nielsen Social top five cable and broadcast programs this past Saturday, January 28th (excluding sports). 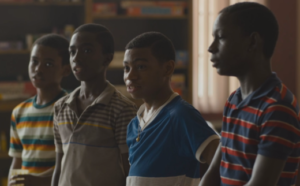 “THE NEW EDITION STORY” made its mark on the music industry, as nostalgic fans pushed New Edition’s songs and albums to the top of the iTunes charts. As of Friday, January 27th, New Edition’s “Heartbreak” album skyrocketed to #14 on iTunes’ US Albums Current Top 100 (making it the highest new entry), and New Editions’ “Greatest Hits, Vol 1” climbed up 40 places to #22 on the same chart. On the Top 40 US R&B Song charts, New Edition claimed 7 of the top 20 spots. The band and its offshoots also scored 15 of the Top 40 US R&B Albums. The band’s place in Hollywood history was codified on January 24th ahead of the premiere, as the group received a star on the Hollywood Walk of Fame, adjacent to fellow boy bands Boyz II Men, Backstreet Boys and New Kids on the Block.

BET’s on-air partnership with Shazam garnered impressive engagement, as the program racked up hundreds of thousands of Shazams for all airings. The activation also drew over tens of thousands of entries into a sweepstakes, representing the most successful Shazam activation in BET history. The contest will send one lucky winner to BET’s signature BET Awards in Los Angeles this June. 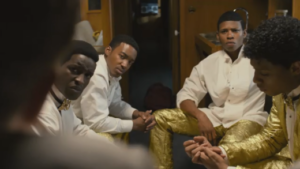 After 30 years of breaking hearts on the record and from the stage, New Edition finally received the biopic they so richly deserve. “THE NEW EDITION STORY” followed the group from their humble Boston beginnings to global megastardom – weathering the highs and lows of controversy, personnel changes, and the ultimate cost of fame. The multi-talented cast included Bryshere Y. Gray, Elijah Kelley, Luke James, Keith Powers, Algee Smith, and Woody McClain as the adult members of New Edition. Along with a stellar cast, “THE NEW EDITION STORY” included a collective of award-winning producers and directors including iconic music powerhouses James “Jimmy Jam” Harris, Terry Lewis and Kenny “Babyface” Edmonds, Executive Producer Jesse Collins and award-winning director Chris Robinson.

For behind the scenes look at the making of the film, plus exclusive clips and photos from “THE NEW EDITION STORY”, please visit BET.com/NewEdition and join the conversation on social media using the hashtag #NewEditionBET.