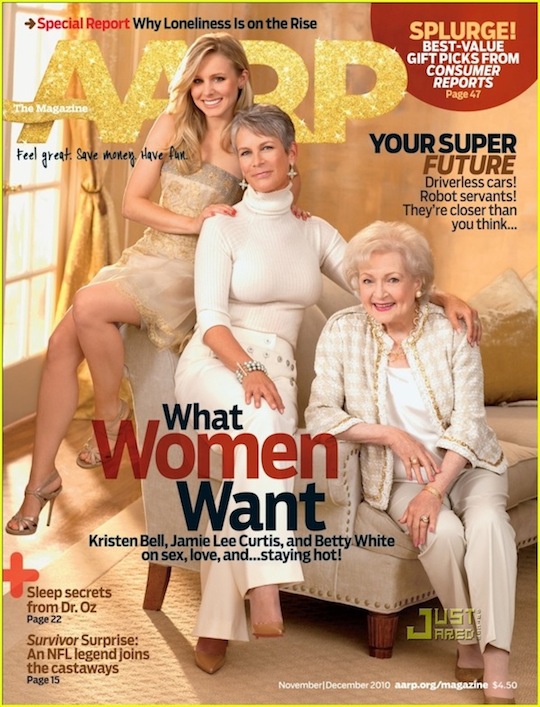 Betty White Kristen Bell,Â and Jamie Lee Curtis share the cover of AARP magazineâ€™s October 2010 issue! In the issue Betty White scoffs at the question. Does desire melt away with age? Betty White is currently in the ATL filming a new hallmark movie with Jennifer Love Hewitt. (P.S. My granny loves the hallmark channel) Â  I really don’t know how I feel about this 88 year old women talking about sex but I have to say its a good read heres what People.com are reporting:

“Does desire melt away with age? I’m waiting for that day to come,” the 88-year-old tells AARP Magazine in its November/December issue. “Sexual desire is like aging,” she continues, pointing at her head. “A lot of it is up here.”

White, who shares the magazine’s cover with two of her You Again costars Jamie Lee Curtis and Kristin Bell, tells the magazine that her first marriage was totally physical. “I married my first husband because we wanted to sleep together,” she says. “It lasted six months and we were in bed for six months.”

After a disastrous second marriage, White met game show host Allen Ludden. She says they were a match made in heaven â€“ even though she wasn’t initially interested. “He bought me a beautiful ring and I threw it back at him,” she recalls, “so he wore it on a chain around his neck. He said, ‘I’m going to wear it until you put it on your finger.’ ”

It worked, and the couple walked down the aisle in 1963, and stayed together until his death in 1981. “The secret to our marriage was enthusiasm,” White says. “When I knew Allen was coming home, I would freshen my makeup and put on a new blouse.”

And the sex was apparently great, too. If Ludden were alive today, White thinks they’d still be sleeping together. But if he were unavailable, White has a second choice. “I don’t have a fella,” she says, “but if Allen â€“ or Robert Redford â€“ were around, we’d have a very active sex life.”

Hereâ€™s more of what the ladies of You Again had to share:

Jamie, on aging and plastic surgery: â€œThere are people who, when you see them on the screen, thereâ€™s an audible gasp of â€˜Oh my God.â€™ They look terribleâ€”or theyâ€™ve done something to themselves and now look like freaksâ€¦There is only one Meryl Streep and one Sigourney Weaver. But I could name 30 other actresses in their [age] groups who arenâ€™t working today. Me, Iâ€™m getting my aâ€“ out of this business in a few years because genetically itâ€™s not going to work for me.â€

Betty, on friendship and women: : â€œIâ€™m bleeding over losing Ruesy [the late actress and Golden Girls co-star Rue McClanahan], who was my dear friend. But as much as I love my friends, I wouldnâ€™t think of going out to lunch with a woman. I canâ€™t think of anything less interesting, except hen parties and showersâ€”and I avoid them like the plague.â€

Kristen, on regrets and wanting to hit â€œrewindâ€: â€œEvery experience has made me who I am, but if I had to choose, I guess I would have raised my glove and caught the softball that sent me to homecoming with two black eyes.â€