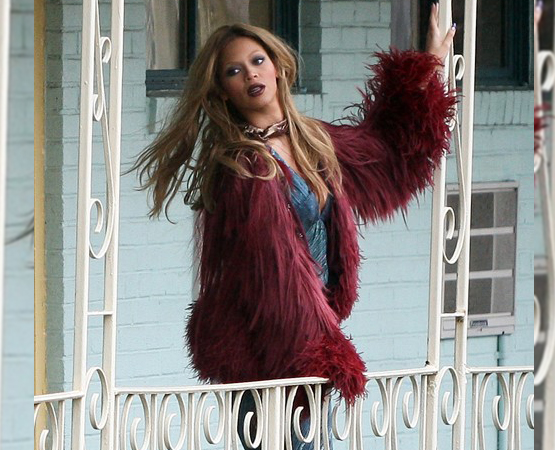 We all know Beyonce has been living in the studio since the top of the year. She has been quiet working on her comeback album. Just when you guys thought she was about to settle down and maybe have kids and let the other pop artist get a little shine, NO! Yall know Bey don’t play. This time around she is experimenting with her musical sound, mixing all the genre’s of music she loves together and incorporate it in with her sound. She was scene on the streets of New Jersey this morning for her photo shoot. From the looks of what she had on it looks like the shoot was inspired by a 70s theme.

â€œIâ€™m not in a box. Itâ€™s not R&B. Itâ€™s not typically pop. Itâ€™s not rock. Itâ€™s just everything I love all mixed together in my own little gumbo of music. [I’m inspired by] Fela Kuti, the Stylistics. So many people â€¦ Lauryn Hill, Stevie Wonder, of course, Michael Jacksonâ€™s Off the Wall â€¦ all of those things Iâ€™m kind of mixing together.â€

I don’t know bout you guys but I’m anxious to hear the new style of music she has cooking up. I mean id anyone can pull it off it’s our girl Bey!