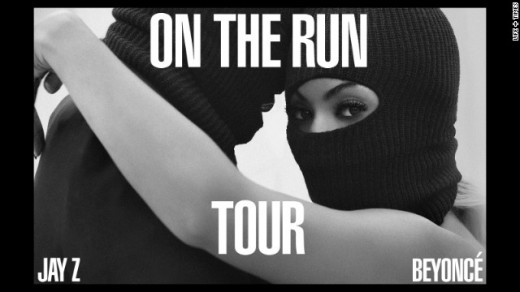 Yall going to learn not to believe everything you see or hear; according to Live Nation the Carters are getting that money for their “On The Run” tour.

Power couple Jay Z and Beyonce are having no problems selling out stadiums despite all the rumors.  Their “On The Run” tour’s concert promoter Live Nation is slamming reports on gossip sites claiming that the joint summer gig is struggling to push tickets.  Live Nation tells “Billboard” that “On The Run” has brought in 90-million-dollars in ticket sales already — and is expected to rack up close to 100-million by the end of its run. That’s a lot of money; that don’t sound like struggle numbers to me!

The number is particularly impressive considering the tour consists of just 19 stops in the U.S.  Each concert is expected to have 45-thousand attendees, and “Billboard” notes that it’s on track to become one of the most successful tours of the year.

Beyonce and Jay’s “On The Run” tour kicks off next Wednesday night in Miami.

Have you gotten your tickets yet?