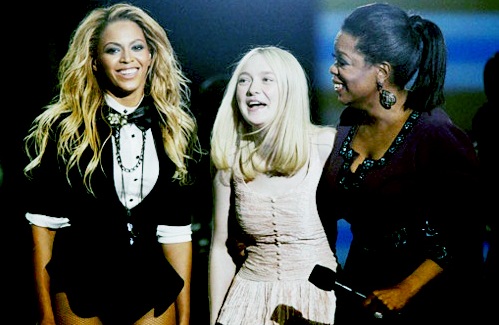 Today the internet was going crazy over the release of early footage from Oprah’s biggest show tapping ever, the LAST ONE! Oprah and her team quickly went to the Internet this morning schowering for the early footage that was not to be released to YouTube and other sites. Amongst the footage released was speeches and most of all the 1st ever performance of Beyonce’s Girls Run the World. Beyonce’s team quickly forced YouTube to pull any content down. So if you didn’t see it this morning you’ll have to wait until next week when the show airs. Better yet tune in to tonight’s episode of Ameican Idol and watch the release of the Official Video!

What the celebs said at the taping about Oprah:

Madonna: ‘It’s no secret that millions of people are inspired by Oprah,’ she said. ‘I am one of those people … She fights for things she believes in, even if it makes her unpopular … I have learned so much from her.

She’s a self-made woman who’s been at the top of her game for over 25 years – and she’s still kicking ass, I vow to be more courageous and never give upâ€¦. Thank you for inspiring me.’

Tom Hanks: ‘Your show has turned surprise into an art form. You are surrounded by nothing but love.’

Maria Shriver: ‘(Oprah) has given me love, support, wisdom and most of all the truth. (I’m ) not alone in receiving those gifts.’

Dakota Fanning: ‘Weâ€™re Oprah show babies. She’s taught us we are enoughâ€¦ our lives have value.’

Beyonce: ‘Oprah Winfrey, because of you, women have graduated to a new level of understandingâ€¦ of who we can be. We can run the world!’

Diane Sawyer (while talking about how a tree grows): ‘That is like life, that is like you. That is The Oprah WinfreyShow.’

Halle Berry: ‘(Oprah has taught us) Weâ€™re more alike than different. All pain is the same.’

Will Smith: ‘Oprah said if this didnâ€™t work out for her, she would have become a 4th grade teacher. You did become a teacher, with the whole world as your classroom.’

Rosie O’Donnell: ‘You saved us from depression when you gave us Dr. Phil.’

The latest project from the Tyler Perry Studios, released via BET Plus app, "All The Queens' Men" season premiere party this week. The writer and...
Read more
Television