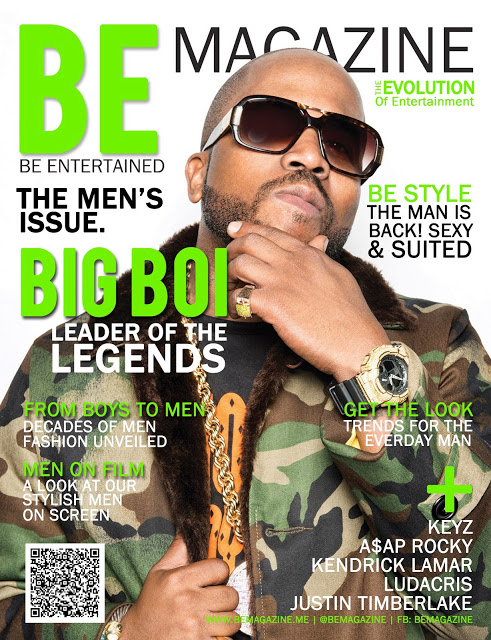 (Atlanta, Georgia) April 17, 2013 – Hip Hop Legend/Entertainment Philanthropist Antwan “Big Boi” Patton Covers BE Entertained  Magazine’s 2nd Annual Men’s Issue as their official Leader of the Legends.
Big Boi is known for making iconic moves in the entertainment industry and is preparing for his next set of amazing endeavors as he kicks off his “Shoes for Running” Tour [tomorrow] April 18th in Athens, GA.
In BE Magazine’s candid cover story, Big Boi opens up about his extensive music career and how he balances family life with his rigorous musical and charity schedule. Big also dishes on why he chose to start his Big Kidz Foundation and exactly what questions push his buttons when he’s on the press circuit.
Along with Big Boi’s cover story, BE Magazine’s 2nd Annual Men’s Issue takes a look at the perfect essentials for the “everyday man” from suits and ties all the way to what men are rocking on their iPods.
BE Magazine also takes an in-depth look at men’s fashion over the past few decades and how it’s evolved. Of course we also have your favorite celebrity scoops inside and a look at who made #theBElist this issue…
BE Magazine’s 2nd Annual Men’s Issue will BE available the 1st week of May.
Visit http://BEmagazine.me & Follow @BEmagazine on Twitter/Instagram for updates.
Boi Boi on how it feels to kick off his “Shoes for Running” Tour

“To play your music in front of fans that love it, it’s the best feeling in the world. Just jamming out with all walks of life.”

Big Boi on why he chose to BEgin a kids foundation: