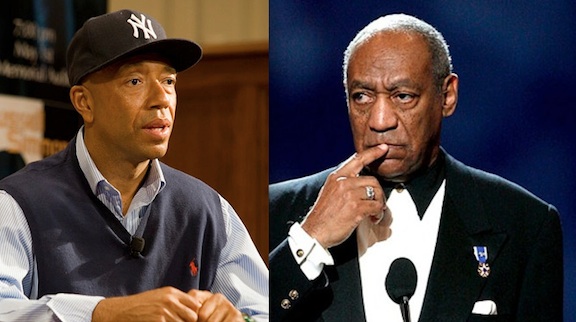 I have to say people in the industry will tell you that Russell Simmons isn’t the nicest person if you meetÂ him on the streets. So after I found out what Mr Cosby said to him, I have to say “Karma A Bitch!!!!” Â Bill Cosby told Russell Simmons to “get the [bleep] out of my face” at the Jackie Robinson Annual Awards Dinner at the Waldorf-Astoria when Simmons tried to apologize for their ongoing beef.

The two have been sparring since 2009, when Cosby launched his “State of Emergency” campaign promoting socially conscious rap music without lyrics celebrating violence, sex or the degradation of women. At the time, Simmons heavily criticized the effort, but tried to make amends with Cosby at the dinner on March 7.

“I wanted to find him to apologize, to tell him I was sorry about my statements and to tell him that I loved him,” the rap mogul writes on his blog. But instead, according to Simmons, Cosby said, “Get the [bleep] out my face!” Simmons also writes that Cosby “walked by me and bumped me with his shoulder as I walked offstage after presenting my award to Sean [Combs, who was honored at the event] . . . I then loved him even more.” Through a rep, Cosby responded to Page Six, “I don’t want to discuss it.”