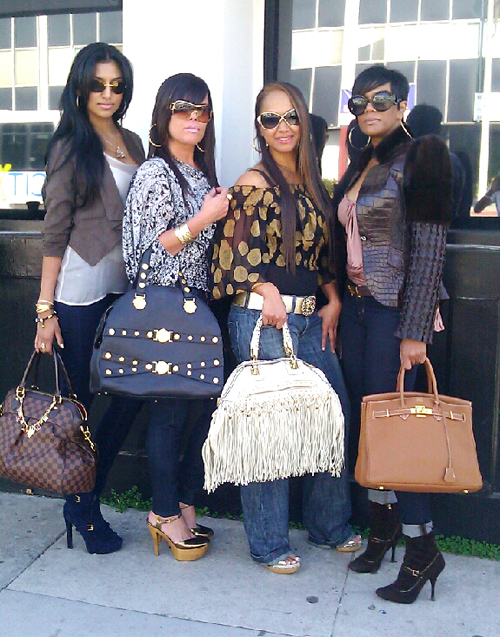 They saying that the wives and girlfriends of the Black Mafia Family are probably getting a new TV reality show. Viewers may get a chance to see Gricelda Chavez, Lisa Buford, Tiffany Gloster, and Tonesa Welch, in the show.

Published in an article of Ozone Magazine, Terry’s wife Welch may appear on the reality show telling her husband’s side of the BMF story. For the record, the organization was arrested in 2005 by FBI as they believed that over 30 members from the organization were involved in moving more than 2,500 kilograms of cocaine a month throughout the US. The prosecutor also claimed that they made over $270 million from illegal drug business.

Somehow this group had a connection with the Hip Hop community. So when their ladies step up to speak on their behalf, it gets quite exciting and interesting.

Terryâ€™s wife Tonesa Welch (far right), who calls herself the â€œFirst Lady of BMF,â€ appears to be the Shaunie Oâ€™Neal of this whole venture and hopes to help tell Terryâ€™s side of the BMF story.

Gricelda Chavez, who was involved with music producer Damon Thomas (incidentally, although not as famous as Kris Humphries, he is also a Kim Kardashian divorcee). Damon was a player in a BMF money-laundering scheme involving jewelry purchases and, when confronted with the evidence, agreed to cooperate with the government as a witness against Terry.

Lisa Bufordâ€™s man â€œPJâ€ was a high-ranking BMF affiliate on Terryâ€™s side of the organization.

Tiffany Gloster and her man Jerry â€œJ Rockâ€ Davis were both indicted by the DEA on BMF-related charges in 2007. Tiffany served a two year sentence for her part in helping to launder the proceeds from J Rockâ€™s cocaine sales. J Rock is currently serving a sentence of 39 years and 10 months in prison.

So, what do you think? Already excited about the upcoming hit? Let us know.