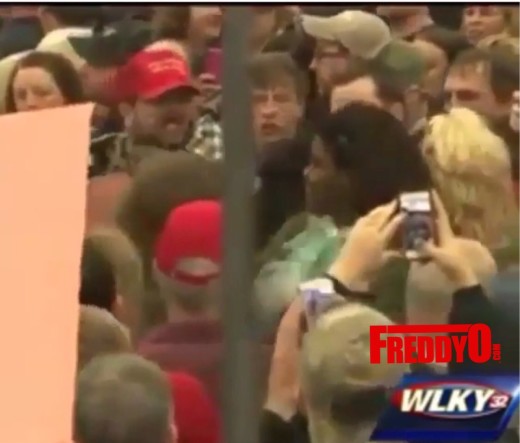 Watching today’s politics feels more like 1956 than 2016. Watching the antics of Donald Trump feels like watching the Dixiecrats of yesterday. A young black woman was physically assaulted then kicked out of a Trump Rally in Louisville Kentucky.

Can’t believe it? Well we got footage of the incident after the break.

Via wlky (Louisville KY): Trump spoke for about 30 minutes to a rowdy crowd.

The GOP presidential front runner picked apart his fellow Republicans. Then he went after the Democrats. “Hillary Clinton does not have the strength or he stamina to be president. She’ll do a meeting then she’ll show up 5 days later to another one then she’ll go home go asleep then she’ll rest,” Trump said.

Many times the crowd cheered Trump, but he was also interrupted by protesters several times. Those protesters were led out of the convention center.

At one point, you can see a woman being pushed by people in the crowd until she left.
black-woman-kicked-out-trump-rally-freddyo1
WLKY spoke with the woman on the phone Tuesday night. She said she is doing well. She is just trying to process everything.
Spotted on WLKY.