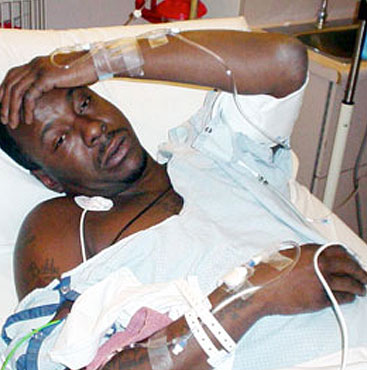 Bobby Brown fans got a scare last week when a rumor began spreading on Twitter that the R&B star had died. The singer called into Atlanta’s V-103 radio station and spoke with the homie Ryan Cameron last week to prove that he was in fact still breathing. He remarks, quote, “I heard about it yesterday and you know, I brushed it off. I think that Twitter’s getting out of hand if they kill me off that soon. I don’t even Twitter, but at the same time I’m alive, period.” Brown says he received several phone calls from people wondering if he was ok, adding, quote, “I started to wonder if you don’t see me or hear from me, it doesn’t mean I’m dead. I’m just thankful, man. I got everyday to look for.”

Bobby Brown has produced several R&B hits during his career, including the singles “Don’t Be Cruel,” “Every Little Step,” “On Our Own,” and “My Prerogative.” His last album was 1997’s “Forever.”