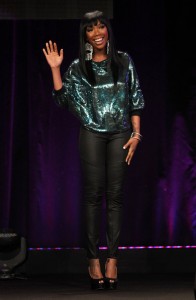 R&B singer Brandy has been very busy working on her sixth studio album and taping BET’s show “The Game.”

The “Full Moon” singer has finally shed some light on both projects plus more.

â€œThis is a dream come true.Â  With â€˜The Game,â€™ Iâ€™ve joined the talented cast of a smart and entertaining TV show and I get to work with the amazing [show creator] Mara Brock.

And Iâ€™m working on a film with Tyler Perry, whoâ€™s a genius and someone Iâ€™ve always wanted to work with, AND Iâ€™m back in the studio working on a new album!

Talk about being blessed! Iâ€™m surrounded by inspired writers and producers who believe in me as an artist and who want to bless the world with timeless music. Music gives my life a purpose and I’m thankful it lives in me.”

In this season of “The Game,” Brandy will play the love interest of Colby Bell (Jason Pitts). She will also be appearing in Tyler Perry’s “The Marriage Counselor.” Besides acting she will be releasing her untitled album on RCA/Chameleon Records. It looks like the singer will be taking the industry back by storm. Go girl!