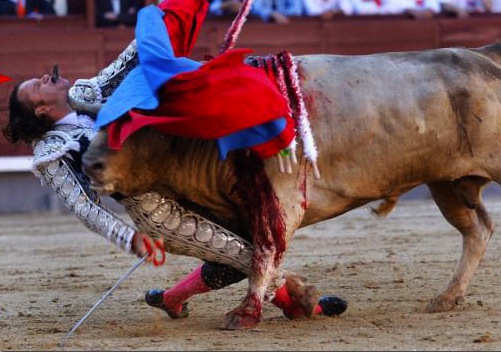 Iâ€™ll never understand the attraction of professional bullfighting. Though bullfighting is not a mainstream sport in the states, there are millions of bullfighting fans around the world who follow the sport religiously.Â Most fans watch bullfighting in macabre anticipation of seeing a gruesome accident similar to what happened to this bullfighter.

Spanish bullfighter Julio Aparicio had the unfortunate luck of stumbling during his match with a bull at the arena of Las Ventas in Madrid on Friday (May 21). 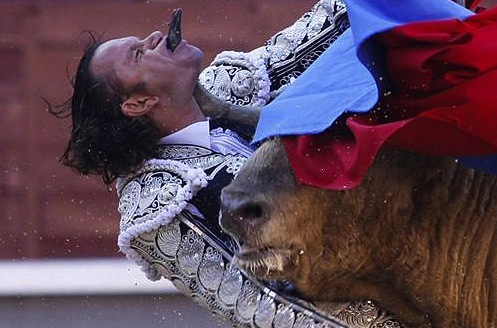 Like a shark smelling blood in the water, the bull didnâ€™t hesitate to take advantage of Aparicioâ€™s misstep by charging and goring him with a horn right up and through Aparicioâ€™s chin and out his mouth.Â For a few horrific seconds, Aparicio was impaled on the tip of the bullâ€™s horn and dragged for several yards before help finally arrived.Â Luckily, the horn didnâ€™t sever a major artery, or Aparicio probably wouldnâ€™t have survived his ambulance trip to a nearby hospital where he was treated for internal injuries to his chin, jaw and mouth. Damn.

WARNING:Â If youâ€™ve already eaten and you donâ€™t want to lose your breakfast all over your keyboard, DO NOT watch the video of the goring after the break. You have been warned!