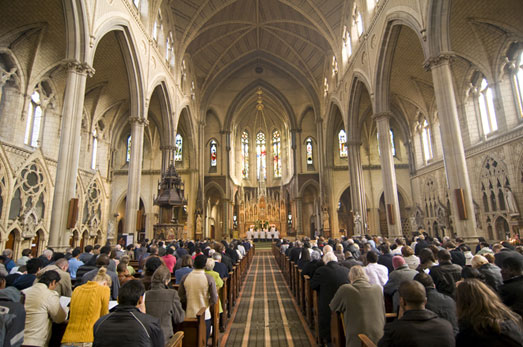 The case came to light after the SBT network aired a video purportedly showing an 82-year-old priest having sex with a 19-year-old altar boy who worked for him for four years. Other young men appeared on the report saying that they, too, had been abused by Monsignor Luiz Marques Barbosa. In its report last week, SBT showed footage of a man who looks like Barbosa having sex with the 19-year-old. It said the footage was secretly filmed in January 2009 by a 21-year-old man who charges Barbosa had abused him since age 12. Click here to watch the video and finish reading the SHOCKING interview with the preists..

Also under investigation are Monsignor Raimundo Gomes, 52, and Father Edilson Duarte, 43, for allegedly having sexual relations with boys and young men.Â SBT said the video was sent anonymously to the network, and reporters went to the town of 200,000 people to investigate last month.

Before raising the allegations of sexual abuse, the reporter asks if the priest had ever sinned.

“Who has never committed a sin?” Barbosa responds.

The priest is then asked if the region has problems with pedophilia.

“I think it is more (a problem) of homosexuality than pedophilia,” Barbosa says.

Asked directly if he ever abused boys, Barbosa says he could only answer such a question “in confession.” He then ends the interview, which was aired Thursday and posted on SBT’s YouTube page.Â Bishop Valerio Breda released a statement saying that in light of the “grave and lamentable facts made public on television,” Barbosa and the two other priests had been suspended.

“We reproach, without restriction and with hearts broken by shame and sadness, the facts in the report which, despite their not having been proven, have outraged human and Christian conscience,” Breda wrote.

He added that none of the alleged victims or their families had ever contacted the church regarding the allegations of abuse.Â Breda said the church was co-operating with police and would also conduct its own investigation.

The church said it would not comment further on the case.