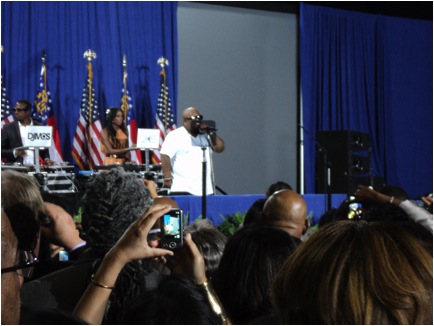 Black people! Why must we continuously take 3 steps forward and then 10 steps back. Ceelo is my homie but you know I guess this was a case of “Keeping it Real Going Wrong”. You know how when you were little and your parents had company & you had to put on your good clothes and be on your best behavior or you knew you was gonna get that whippen? Well, I think Ceelo forgot the Press was gonna give him that Whippen for using bad language when Tyler Perry had company, Good Company “President Barack Obama”. I guess Ceelo Green was having a Bobby Brown Moment. Check out the clip below. Notice mid-way during the song Ceelo felt a certain kinda way and switched to the Pg-version and then switched back. He even asked :Can I Cuss and it didn’t look like the crowd agreed. How many people think that Ceelo was justified in “Keeping it Real”? No word from Mr Tyler Perry or Barack Obama’s camp as to Mr Green’s choice of #Version of the song $%&-U!