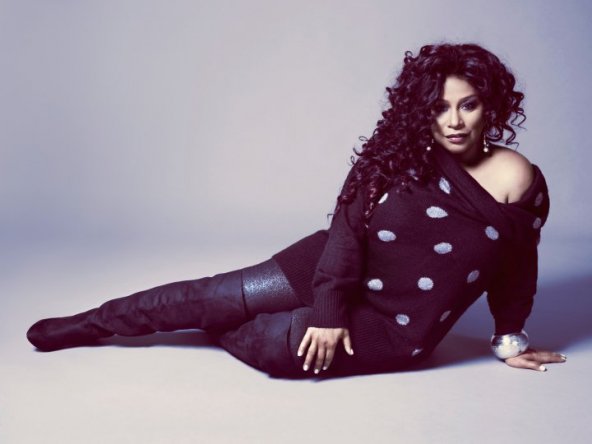 Chaka KhanÂ is still a women with standers.. These pictures are from a recent photo shoot Chaka did for Evans clothing line who caters to women with curves.

Here is an interview she did with Tonic on her life’s passion..

Talk to Chaka Khan for a matter of minutes, and it’s clear where her real passion lies: with kids.

“My whole career I’ve been assisting children â€” on a smaller scale, of course, than now. But all my life I’ve been working with children. They’re my favorite people, and the most subjugated, innocent and mistreated ofttimes â€” the ones who suffer the most.”

It was with those kids in mind that Khan started the Chaka Khan Foundation back in 2003 â€” making her life-long passion an official non-profit that’s getting down to some serious work helping youth in Los Angeles.

“My heart’s virtue is to help and protect the innocent,” Khan tells Tonic. “That’s what I’m about. That’s why I’m here.”

“I happen to be a great singer,” she adds. “[But] this gift of music is a tool so that I can reach more people on a larger level to be of service. The biggest gift is of being of service. That’s the rush.”

Starting Friday, the public can get in on the rush, as the Chaka Khan Foundation kicks off a fundraising auction, with proceeds going directly to help inner-city kids find a spark and an education they can’t find anywhere else. Up on the block? Everything from gift cards and jewelry, to an exotic vacation, to one truly priceless prize for any music lover: Dinner with Chaka Khan herself.

“The auction is going to be amazing, and I just urge everyone, ‘Let’s do this!’ Let’s do this for our future,” she says. “I’m appealing to everyone to invest in our future … our children. They are our most valuable commodity, and we have to stand up and treat them as such.”

Chaka Khan was raised in Chicago “by two mothers and a father,” she says, who all worked for the University of Chicago, and all served as inspirational mentors. Her stepmother was a Montessori school teacher. Her birth mom was an artist and painter. And her father was a philosopher, deep into Dostoevsky, who took off for Ibiza to shoot photos for a few years after divorcing her mom. “That opened my eyes to a whole world â€” that there is a world outside of Chicago, and America. I think he planted the seed, a thirst for knowledge of the world.”

“I was a rebellious chick,” Khan says, citing her time with the Black Panthers and more, but her parents supported her throughout, and were there to guide her when she needed it. Perhaps their biggest lesson? “Life is yours for the taking,” she says. “You just have to be open, and open up to the openness.”

It’s a message she hopes to impart through the work of her Foundation. But it isn’t so easy in a world where kids are tied to video games and the Internet more than real-life. “We were more hands on, organic, tasted, smelled, felt the world [when we were growing up],” she notes. “A lot of kids don’t get that they’re in font of a screen and playing a game. We played games, for real. That’s a big difference.”

“We have to bring them back to the real, first,” Khan says. “You are empty, in a way, if you don’t have that aspect of yourself … and these kids are lost, in a big way.”

Thanks to the Chaka Khan Foundation, more than a few kids in Los Angeles are on their way to being found.

After all, it’s Khan’s personal mission: “I will do everything I can,” she says, “to ensure that any child I touch is gonna be alright.”