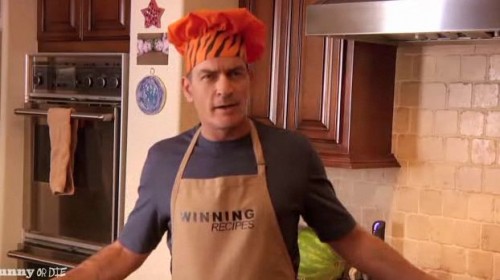 The war between Charlie Sheen and his bosses are about to get even crazy. Sheen has now filed a multimillion dollar lawsuit against Chuck Lorre and Warner Brothers for breach of contract in Los Angeles Superior Court Thursday. The papers, filed by Sheen’s attorney Marty Singer, indicate he’s not only demanding payment for the scrapped Two and a Half Men episodes, but he’s also seeking damages on behalf of the show’s crew.

The lawsuit states that: “Lorre, one of the richest men in television who is worth hundreds of millions of dollars, believes himself to be so wealthy and powerful that he can unilaterally decide to take money away from the dedicated cast and crew of the popular television series Two and a Half Men in order to serve his own ego and self-interest, and make the star of the Series the scapegoat for Lorre’s own conduct.”

Sheen, is seeking more than $100 million for the lost salaries plus punitive damages, alleges he put up with years of Lorre “humiliating, harassing and disparaging” him, and was punished by Lorre for speaking out after Lorre allegedly refused to write scripts to complete the 2010-2011 season.Sheen has done countless interviews, and now has added a funny new video for FunnyorDie.com to the list. Here’s the video and the rest of the story.

“Warner Brothers capitulated to Lorre’s egotistical desire to punish Mr. Sheen and to stop work on the Series for the rest of the season, and used its powerful public relations machine to create a myth to justify their conduct by wrongly blaming Mr. Sheen.”

The lawsuit adds the studios violated Sheen’s “right to perform and receive compensation to which he is contractually entitled.”

As for Warner Brother’s claim that Sheen’s physical condition had deteriorated as part of its reason for firing him, Sheen’s lawsuit argues the firing was a violation of his employment rights for “alleged physical or mental disability.”

Warner Bros., CBS and Chuck Lorre have no comment on the filing. However, a source close to the production says that no Two and a Half Men crew members are knowingly a part of Sheen’s lawsuit.