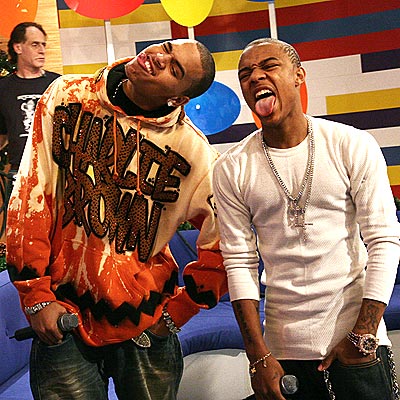 R&B singer CHRIS BROWN and rapper BOW WOW were left long faced during a night out in New York City, after they failed to crash a star-studded party hosted by rap crew CASH MONEY. The Kiss Kiss hitmaker and the hip-hop star reportedly crashed a listening party for rapper Drake’s new album at MSR studios, hosted by bosses at his incarcerated mentor Lil Wayne’s record label.
The pair were reportedly turned away because they weren’t on the invited guest list – but it wasn’t the only rejection the duo faced that night. According to the New York Post, the pals were turned away again by security at another hotspot, celebrity nightclub SL – because their entourage was too big.A source says, “They showed up with a huge entourage all trying to get in, but they were totally denied at the door.”
Why do folks always have to travel like a flock of birds? Follow CourtneyL.