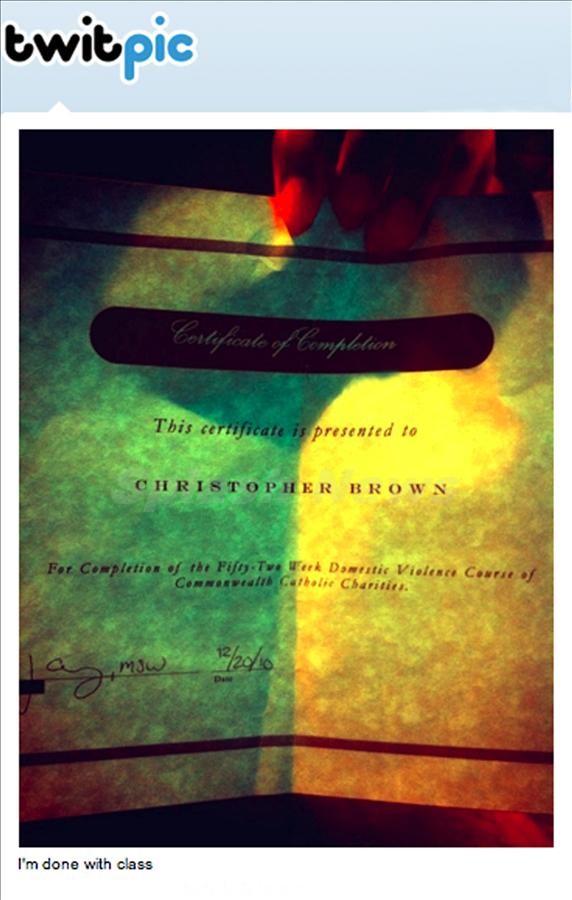 Chris Brown is one step closer to closing an ugly chapter in his life. On Monday, the R&B star announced that he had completed his domestic violence course stemming from his assault of ex-girlfriend Rihanna in 2009. The singer posted a photo of his certificate of completion on his Twitter page, followed with a tweet that reads, quote,

“I have enough self-respect and decency to be proud of accomplishing this DV class. Boyz run from their mistakes. Men learn from them!!!”

Last month, the judge overseeing Brown’s case, Patricia Schenegg, praised the vocalist for his willingness to fulfill the terms of his probation. She remarked, quote, “Of all probationers I’ve ever had, and I’ve had thousands of probationers, no one has ever done a better or more consistent job than you have.”
Chris Brown was arrested in February of 2009 after he beat Rihanna following a pre-GRAMMY party. He eventually pleaded guilty to felony assault and was sentenced to five years of probation, 180 days of community labor, and a domestic violence course. Brown is due back in court for another progress hearing on January 28th.