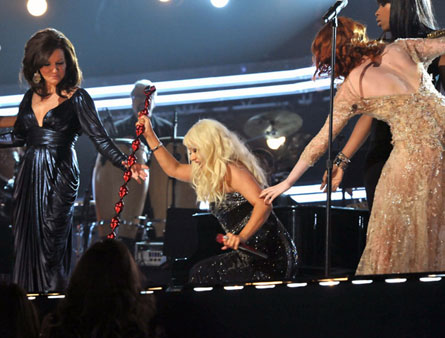 The Grammys had a couple of crazy moments at times, but for the most part, I was bored with it all.

Did you see Christina Aguilera fall during the Aretha Franklin Tribute?

In her video appearance, Aretha says…

“I wish that I could have been with you tonight, but since I couldn’t – next year, OK?”

It’s pretty clear to me that Aretha is not leaving the music scene any time soon. Â The “Queen of the Grammys” had surgery last year and has cancelled a number of appearances.

I must say, the 68-year-old Aretha Franklin has lost a lot of weight and looked pretty healthy.

Just so yall know people are saying that her ‘surgery’ was really gastric bypass… And I must say she has lost a lot of weight??? What yall think? Here’s the video: