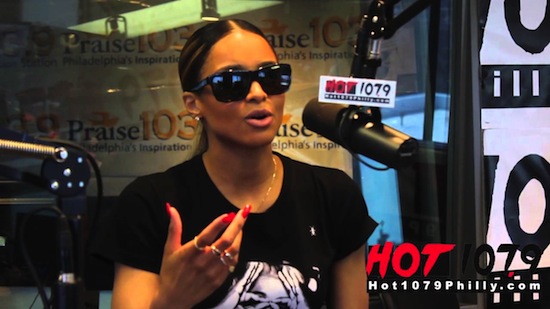 I have to say I was kind of shocked to hear Ciara express her feelings about rapper Future and the issues between she and Rihanna in a recent interview. For weeks people have been talking and now we get to hear it from her mouth.

Theybf reports Ciara recently chatted with The Qdeezy Show on Philly’s Hot 107.9 where she discussed the making of One Woman Army, but most importantly, she opened up about rapper Future and the issues with Rihanna. It was a rare moment of “openness” from the famously private singer. Here are the highlights:

On why she’s finally being open about her life/relationships:

Relationship wise, I use to be really private and protective over a lot of stuff and I feel like now, it’s like why be afraid? Live your life. Somebody is going to judge you, no matter what, one way or another so just live your life and be comfortable in it.

On meeting Future and how they began dating:

We actually met working at first and our relationship was very organic. He is an amazing guy. Like, he is really a gentleman and I don’t want to say too much and then he’s like, ‘Babe, you’re saying a whole lot,’ but he really is just an amazing man. It’s like when we were working on the personal side of things, I really saw an amazing person and the way that he approached me since day one is just the way a man is supposed to be from my perspective.

It just really organically happened that way. I didn’t expect anything to come from us working together. I didn’t even know what to expect from going into the studio with him and then we began to meet each other and everything just began to flow. He is really cool, like he is my friend too. So I felt something really unique from the beginning and then it just organically went this way.

On what she likes about Future:

I think it was a collection of things [but] I’m going to try and keep this really short. He is just a true gentleman like whether it’s just naturally opening the door for you or like…. I never had to ask him to do that. I hope he doesn’t kill me but just little things like he pays attention to the things you say. And then he and I are both Scorpios, so we share a lot of things [in common] and so when we are having conversations, a lot of things were really clicking and I’m like ‘Yo!’ I just felt it.

I can’t even explain everything but it was a combination of things because it can’t just be one day, great conversation and then boom, like it was a series of events and experiences with a person. And again, it’s the small things that really matter. […] When people ask me what I like, I say ‘I like a guy that can be tough on the outside but they have to have a heart on the inside’ and the one thing you’ll know about him is that he has a heart and he is just super cool.

On her relationship with Rihanna:

There is no relationship…

On if she has an issue with Rihanna:

If something is supposed to happen, it’ll happen. But even when it pertains to her I never had an issue with her. So I don’t know what it is, I can’t figure it out. I guess I don’t care to figure it out. But I always came from a place of love and support for her ever since we hung out a little bit, or whatever it is. So she’s on whatever she’s on, and it is what it is.

Of course Rihanna being the messy person that she is had to respond.  After the interview went viral, Rihanna responded to a NAVY fan who posted a photo about the interview. 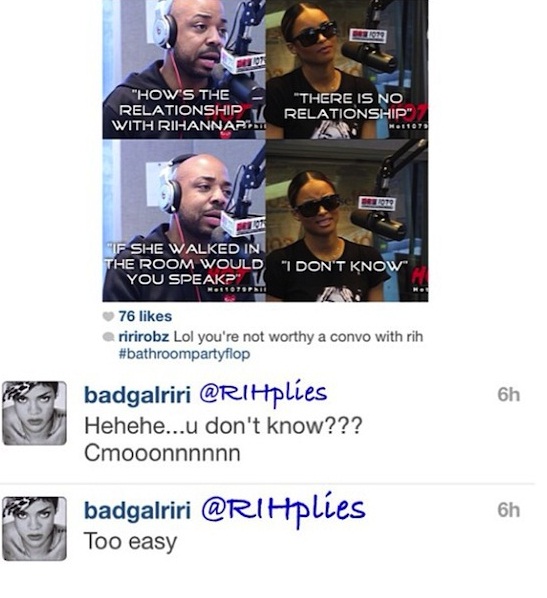 When will the shade ever end?