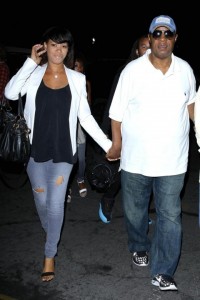 Legendary musician and humanitarian Stevie Wonder; and girlfriend Tomeeka Robyn Bracy happily welcomed the birth of their second child together, a baby girl named Nia! Previously, numerous media outlets had reported rumors that Bracy was pregnant with triplets but Wonder shot that rumor down with a smile on a recent appearance on The View:

During the appearance, Wonder also mentioned that his then-forthcoming daughter would be named “Nia, which is ‘purpose,'” which references one of the seven principles of Kwanzaa, a week-long holiday which celebrates the African heritage within African-American culture.

Although a representative for the “Isn’t She Lovely” singer had confirmed the birth of Nia with US Weekly, no other details were provided. Wonder has eight other children ranging in age from one to 39 years with five different women.

We offer our heartfelt congratulations to Stevie and Tomeeka on the birth of their new bundle of joy!