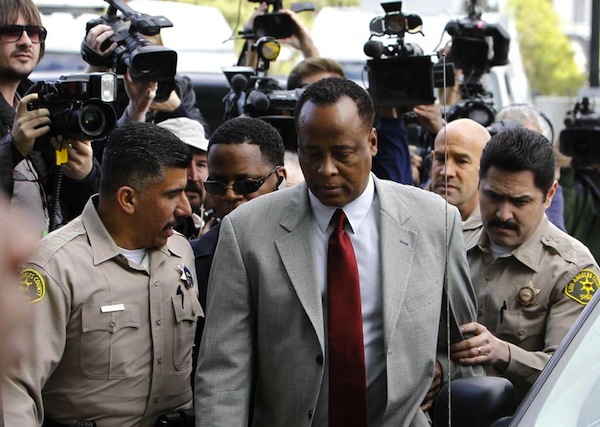 There’s at least one person supporting Dr. Conrad Murray in his fight against an involuntary manslaughter charge. One of the patients at Murray’s Las Vegas practice tells TMZ.com that the judge made a bad decision when he suspended Murray’s medical license on Tuesday. Robert Day says the judge made a “100 percent poor choice,” adding that the ruling is, quote, “preventing a phenomenal doctor from working.” Day goes on to describe Murray as a “compassionate reserved gentle giant,” noting that he “just wanted to help” Michael Jackson. On Tuesday, Judge Michael Pastor determined that there was enough evidence for Conrad Murray to stand trial for an involuntary manslaughter charge in connection with Jackson’s death. Judge Pastor subsequently suspended Murray’s medical license as a condition to his bail.
Conrad Murray was Michael Jackson’s doctor when he died from cardiac arrest on June 25, 2009. Lethal levels of propofol were eventually found in the singer’s system. Murray has admitted to providing Jackson with the drug, but denies being responsible for his death. He faces up to four years in prison if convicted of the charge.