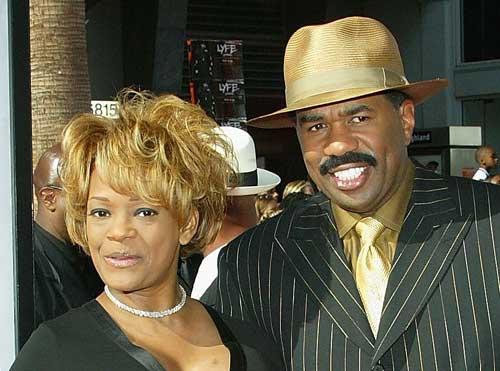 I really don’t know what to say about all thisÂ Steve Harvey & his ex-wife Mary Harvey mess but I will say Steve is going to court with a vengeance against Â Mary. After his ex took to YouTube to throw trash on the comedianâ€™s name, everyone knew it was going to be a battle. So today (Feb. 7), the two sides will square off in a Collins County, Texas court room to hear the comedian/author/radio hostâ€™s request for sanctions against her for allegedly violating an injunction against talking about the familyâ€™s custody case over the Internet.

But thatâ€™s not the end of the drama. Marjorie Harvey, the current wife, is considering filing a defamation suit against Mary for the accusations made against her in the videos. Mary Harvey, the ex, mentioned in the videos that the radio host is also suing him for allegedly preventing him from getting a show with Oprah.

â€œAs I sit and talk and speak right now, thereâ€™s a lawsuit thatâ€™s been filed against me in Texas, because in Steveâ€™s opinion, I was responsible when Oprah didnâ€™t give him a TV show,â€ she said. â€œIâ€™m being sued for that as I sit here on this sofa today.â€

Steve Harveyâ€™s attorney, Bobbie Edmonds, didnâ€™t mention any details about the suit, but said the judge has sealed it. However, she did comment via a statement about the now infamous videos Mary Harvey posted to YouTube:

â€œWe are appalled and aware of the videos and the other fabricated documents, which were placed on the internet over the weekend by the ex-wife of Mr. Steve Harvey, which contained false, misleading, derogatory, disparaging, malicious, explicit and slanderous information about Mr. Harvey, his current wife and others.â€