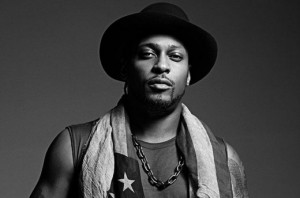 R&B/soul singer-songwriter D’Angelo made an appearance on this weekend’s episode of Saturday Night Live hosted by actor J.K. Simmons. The “Brown Sugar” singer’s SNL performances were seemingly for promotion of his latest album, “Black Messiah” which was released December 15, 2014. D’Angelo’s first performance of “Really Love” was everything you’d expect from him: smooth, sultry vocals…sometimes a bit muffled and hard to understand but still intriguing and sensual, accented by Spanish guitars and overall laid back groove.

It should be noted that “Black Messiah” has received some acclaim and decent radio airplay from major markets but his message-driven performance of the timely and socially-conscious song “The Charade” on the SNL stage, may help him garner new fans and more airplay. The performance featured D’Angelo wearing a black hoodie, his band The Vanguard, and background singers adorned in all black with each shirt emblazoned with either “I Can’t Breathe” or “Black Lives Matter” in obvious tribute to Trayvon Martin, Eric Garner, and Mike Brown. Garner and Brown were unarmed African-American males who were fatally attacked by police officers last year, while Martin’s fatal attack occurred in 2012. There was also a chalk line in the center of the stage referring to the lyrics of “The Charade:”

All we wanted was a chance to talk
‘Stead we only got outlined in chalk
Feet have bled a million miles we’ve walked
Revealing at the end of the day, the charade…

Check out D’Angelo’s performances here and share your thoughts on D’Angelo’s return to music!