Designer Babies: Chrissy Teigen Opens Up About Choosing to Have a Baby Girl! 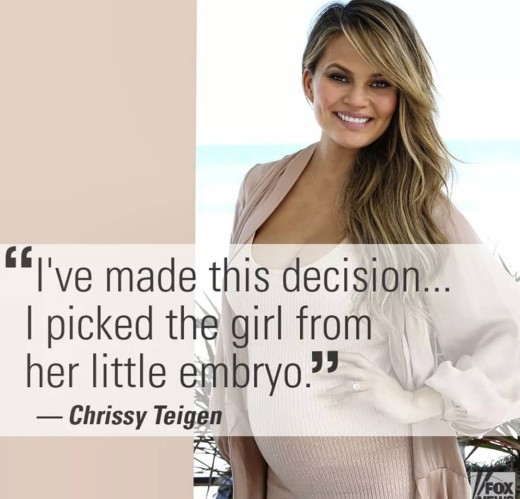 Chrissy Teigen opens up to People Magazine about choosing to have a baby girl. Once upon a time people could only dream about choosing the type of chromosomes that makes up the sex of a baby. Now it’s a reality thanks to modern science.

Chrissy Teigen the beautiful wife of John Legend shared how beautiful birthing story with PEOPLE. The lovely starlet shared that the couple had issues with conception and sought out the vitro fertilization that allowed the couple to determine the time, the place, and even the sex of their baby. Chrissy shares,

“I’ve made this decision,” Teigen tells PEOPLE exclusively. “Not only am I having a girl, but I picked the girl from her little embryo. I picked her and was like, ‘Let’s put in the girl.’ ”

Wow that’s bananas! What do you think about picking the sex of your baby before conception? Is that playing GOD or is it a couple’s prerogative?

Chrissy shares her thoughts on becoming parents, “I’m excited to see what he is going to do because I think we’ll have two very different styles,” says Chrissy. “I’m excited to see that part of John; We’ve been together so long, and sometimes we look at each other and we’re like, ‘I know everything about you and you know everything about me,’ but we have no idea what we’re going to be like as parents. I think it’ll be really fun. I’m excited.”

After the announcement Twitter went crazy but Chrissy is totally unbothered and tweeted this message to all of her fans,

“This is all so interesting. I said it so casually because i’m just open. I’m around so many open-minded people & forgot it’s controversial. Anyhow I am not mad at anyone’s beliefs but I don’t really actively seek out people to make them feel bad about their decisions either. So many typos, my apologies. pretty under the weather. probably this darn science baby.”