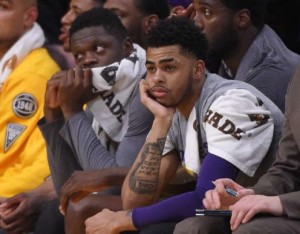 Not only did the recording leak out, but D’Angelo failed to mention to Nick that he was recording him. After the news broke, it was stated from an inside affiliate of the team, that the Laker players would get up and move away from D’Angelo if and when he’d approach them. Was this a prank gone bad or just irresponsible behavior? Or are we putting too much into it then we should? Have we as a society become so consumed of media outlets that we are desensitized of the true value of personal and private space. We have become so inflamed with the hype of the commercial aspect of it being that they’re professional basketball players oppose to dealing with the real issues of a man cheating on his soon to be wife, in this case Iggy Azeala and her realationship with Nick is being overshadowed by all of the rigor of whether or not the team stays together or not? What about whether or not Nick and Iggy stay together or not?

Recent interviews show that D’Angelo and Nick would like to move pass this and that Lakers Coach Byron Scott stated that this is an inside matter and they would like to keep it that way.