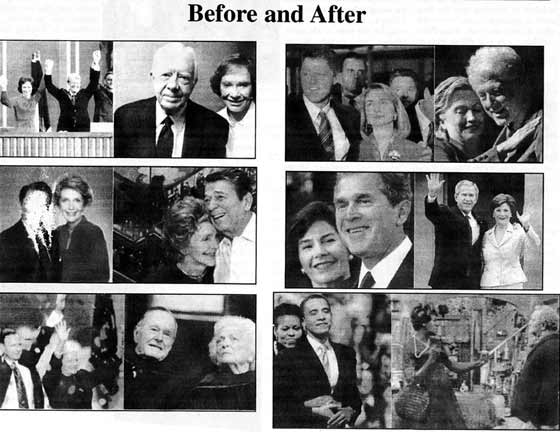 I can’t believe these folks published this mess. First of all it is rude and your intent was filled with malice. Secondly, Esther and Fred were not a couple and they depicted arguments. What ya’ll think about this mess?

Phillip Sciarello, publisher and part owner of the Smithtown Messenger on Long Island, defended the decision to publish the photo, but added the newspaper would run a retraction in its next edition for anyone who might have been offended. There isn’t a need to retract it. You expressed your racism and disrespect.

The photo spread features “before and after” shots of the last six presidents and their wives, starting with Jimmy and Rosalynn Carter and ending with the Obamas. The “after” photo of the Obamas is a shot from the 1970s show, with Redd Foxx as Fred Sanford and LaWanda Page as Sanford’s sister-in-law, Aunt Esther. She is seen standing ready to box Sanford. The characters often verbally jousted as part of the show’s story line.

The “after” photos of the other presidents feature their images as slightly older than when they took office.Â  It is no way they could have made a mistake so there isn’t a need to say I’m sorry because you know what you were intentions were and it wasn’t poor satire. –Courtney L.